Expounding on the expo: Janet (pictured above) and I had our usual great time at the Chevron Houston Marathon expo yesterday. Of course, as usual, we parked on the wrong side of the massive George R. Brown Convention Center and had a looong walk to get into the expo. Janet put her usual sunny spin on the situation, declaring it was good for us to stretch our legs. We quickly picked up our race numbers, official t-shirts, and large bag (to be used for what we need before and after the race), and then it was time to shop! First, we both got a free chair massage, really loosening up the neck and shoulders. But we really needed the chair massage on our way out, because our bags got very heavy by the time we were done. We scored a bunch of free swag (like bouncy balls, travel toothbrushes, rice samples, and a towel), and we really didn’t spend a lot of money. For a change, I didn’t buy the cheapie sunglasses (I’d already bought three pairs at previously expos). My big quest? To buy a new running jacket with two pockets for less than about $20.

One big draw of the expo always is the cheapie clothes. So I figured finding the jacket would be a cinch. But, of course, it wasn’t. There were tons of socks, shorts, tops, shoes, and Gu. But very few cheap jackets. What the heck? In fact, there was only one vendor who met the bill—the running jackets were $19.99. I tried on a bunch of them and finally found one that fit and had two pockets (they were vertical instead of horizontal, but I was ready to settle). 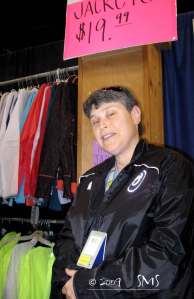 Janet snapped a pic of me trying on jackets. Unfortunately, she was sitting down so that shooting up gave me a lovely double chin. Thanks, Janet! If I become president of the United States, you will NOT be shooting my official portrait!!

Despite the expo excitement, I still managed to get most things done on Friday’s list. To wit:

• I decided to wait until today to get a few groceries, especially a couple bagels for tomorrow (I usually eat a banana and a bagel for my prerace meal).

• I discovered that the photos hadn’t been uploaded to Smugmug. I found the backup DVDs and will have that as a get ’er done next week.

• I opted out of the short jog, because we walked so much at the expo (and to and from the car). I jogged two miles this morning with absolutely, positively NO knee pain! Airrosti worked for me, apparently. Wish it could do something for my stamina, though. I really feel out of shape; I’m sure I’ll be cursing my two-week nonrunning taper by mile four.

I’ll be listing my race goals before I leave for the GRB tomorrow morning. By the way, the weather forecast is for rain around 6 a.m. (while I’m driving to the race), a low of 55 degrees and a high of 69 degrees. Looks like a warm race!

This entry was posted in injury, running and tagged knee pain, marathon expo. Bookmark the permalink.