You say you don’t have enough money to buy a digital SLR (interchangeable-lens) camera? Or maybe it’s the time investment in learning how to take great photos that’s making you shy away from pulling the trigger on that big dSLR purchase. But your kid plays sports, and you want to document his or her season as best you can. What’s a point-and-shoot parent to do?

There are a couple solutions. First, you can hire someone like me to take action shots of your child. You get to sit back and enjoy the game, while someone else snaps away. Or  you can use your P&S camera to get the best-possible game photos that you can. No, you probably won’t come away with too many “real” action pix due to the shutter lag and lack of a long zoom. But there are some basic P&S photos that are better than those of your kid just standing there smiling holding a football, soccer ball, or baseball.

Take the above photo, for example. Yes, it helps to have a zoom lens like my Nikon 70-200mm, which is what I use on my Nikon D300 for my outdoor action shots. But it’s fairly easy to take an interesting coach and the players huddle shot with a point and shoot. Just be sure to zoom with your feet and move to where you can get as many faces in the photo as possible without going on the field or court. 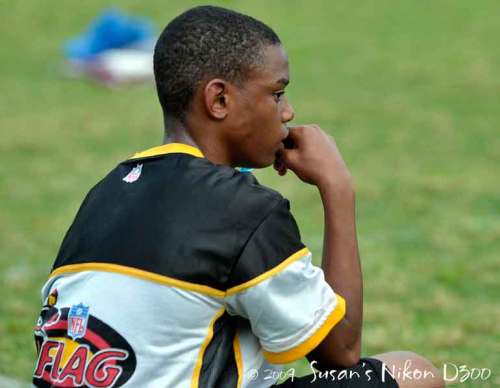 You also can use that P&S camera for good sideline shots of players waiting to get back into the game. Or a coach talking to a player. Just hold the camera steady and try to keep the sun at your back.

That being said, there ain’t nothing like a good dSLR and a fabulous lens for getting the best action photos! These shots all were taken during last Sunday’s flag football games in our community. There usually are five contests going on at once, which makes for lots of messy backgrounds. The best antidote for all that clutter? Bokeh, my friends! That beautiful blurred effect that only fast lenses (usually f/2.8 and faster [smaller number]—think wide-open apertures) can yield. When I’m using my f/2.8 70-200mm lens, as I did for all these photos, I know I’m going to stop the action and blur the background, which makes for the most-appealing photos.

Sidebar: That’s my buddy Ben who looks like he’s asking the question in the above photo. His older twin brothers are the same age as my #2 son. When all three of them played Little League baseball, the Mister and I would see Ben at the games. As regular reader(s) of this blog know from seeing his photo, the Mister is fairly bald, and his remaining hairs are white. This was a conversation I had with Ben several years ago:

Me wondering where he’s going with this: “They’re both in heaven, Ben.”

Ben: “No, I’m talking about your grandpa! Where is he today?”

It finally dawned on me that Ben was talking about the Mister! I about busted a gut laughing. It’s true that the Mister is old enough to be #2’s grandfather and certainly looks like it, but it tickled me that Ben thought he was so much older than me. Ben is such a hoot!

The #2 son has the football in his sights.

Speaking of the #2 son, he’s a pretty talented flag football player. He’s a decent receiver and is very fast. I really enjoy taking photos of him, especially when I hit the peak of the action, as I did above.

#2 makes the catch and is ready to run up the field.

I wish my reflexes had been faster on the shutter button to have gotten the next photo where the pass was just going into #2’s hands (as I did with the first photo of Caleb, who plays on the younger-division team that #2 coaches). Can’t win them all, I guess.

I also like when the photos tell a story. In the next set of three pix, the #2 son took the handoff on the first play of the game and ran for a touchdown.

A little close for comfort for the sideline photographer!

On his way to six points!

Capture all that action with a point and shoot camera? Hardly possible!