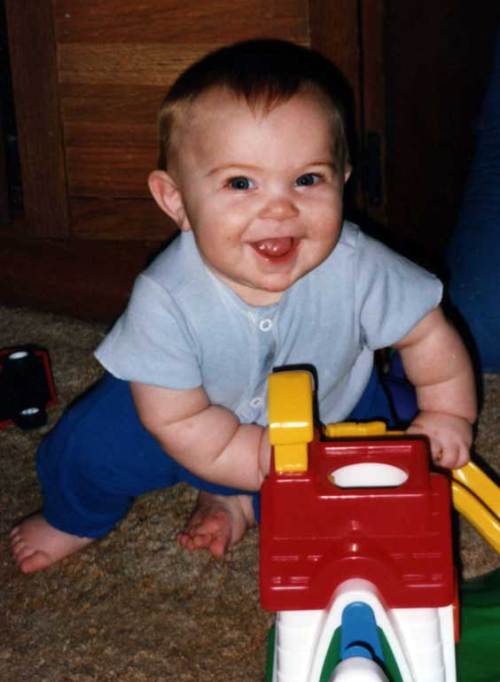 Fourteen years ago today when they pulled C.J. out of me, I was a little surprised that they didn’t find a mini trampoline lodged in there with him. He was such an active baby in utero that my dear, late in-laws were convinced he was a girl, believing the old wives’ tale that boys are lazy inside, apparently storing up energy to wreak havoc once they’re born. Even with the solid, indisputable evidence of an amnio that showed he was 100 percent male, they couldn’t believe that such a bouncy baby was a boy.

But boy, oh boy, is C.J. ever all boy! He crawled like a champ at five months, walked at nine months and a day, and jumped out of his crib at 18 months, bloodying his nose. No gates could contain him; he always was so anxious to keep up with his big brother.

C.J. laughs as Jake feeds him.

C.J. always has been a good athlete. When he started playing soccer at age five, the Mister and I watched as the other kids, who already had played a season, maneuvered the soccer ball around a set of cones.

Not to worry. C.J. took the ball and kicked it around the cones like he had been playing soccer all his life. Maybe it was a soccer ball that he had in the womb, not a mini trampoline!

As talented an athlete as he is, he never has cared about being a star. He was one of the very few six-year-olds who would pass the ball in soccer and basketball. He’s always so genuinely happy when one of his teammates scores. C.J. always has thought about others first, both on the field and court and at home and with friends.

C.J. shows off his flag football moves four years ago.

Even though C.J. is a tough little guy, it’s his tender side that makes him so special to us. After dancing with me at a wedding several years ago, he told me that he really didn’t want to dance, but he did because he knew that I wanted to. When the Mister was diagnosed with diabetes type 2, he wrote the sweetest, most-heartfelt letter to him that a 9-year-old ever could write.

Of course, when he was born I whispered in his ear, “You’re going to be my easy child.” Maybe that had something to do with how he’s turned out!

C.J. catches the winning touchdown in overtime a couple weeks ago.

C.J. runs for yet another touchdown.

C.J. is just days away from the end of middle school. Even though he’ll be a high school freshman when school starts again near the end of August, I hope he’ll always remain my sweet, athletic, smart, bouncing baby boy.

This entry was posted in family and tagged #2 son, birthday. Bookmark the permalink.