The Non-Delightful Light Battle; Warning: Eyes May Glaze Over

Back in May I wrote about my trials and tribulations with shooting our high school’s dance show in the school’s auditorium. Saturday night found me back in that same location trying to take decent photos of our high school’s play, “Laughing Stock.”

The #1 son and my “third” son Chase wanted to see the play (#1 was determined not to laugh during it), and I decided to tag along (because really what high school senior doesn’t want his mom hanging around with him?). I knew several of the actors, which meant I knew that their moms would like good photos that are impossible to take with a point and shoot. 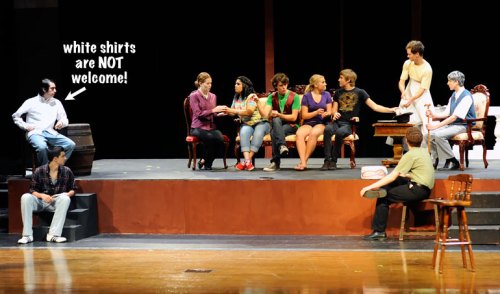 I tried my best to sit as far away from other people in the audience, because, well, my camera’s shutter is very loud. Especially in a quiet auditorium. Plus I knew I would need to chimp (e.g., check my LCD) periodically to make sure my settings were correct. Those lighted cell phone screens that are annoying in the dark? Well, my LCD monitor looks like a torch in comparison!

I remembered from taking pix of the dance show that the lighting is funky on stage. That’s where exposure compensation comes into play. Exposure compensation (the +/- button) lets you add or subtract light without changing your aperture; it allows you to adjust for the bright lights that are on stage, as well as backlighting outdoors.

I was using my Nikon D700 (which does a wonderful job with high ISOs with Noise Ninja’s help, of course) and beloved Nikon f/1.4 85mm lens to let in as much light as possible (no flash photography necessary). My ISOs ran from 1000 to 2500 when it was pretty dark. At first I tried a mild exposure compensation of –.33 but quickly went to –.7 and –1 to try to darken the effect of the overwhelming overhead stage lights.

Too much light despite an exposure compensation of –1.33.

An exposure compensation of –1.33 worked pretty well, but as you can see above, sometimes the photo still was blown out. In this case I quickly chimped and reset the e-c to –1.67.

Wow, what a difference! 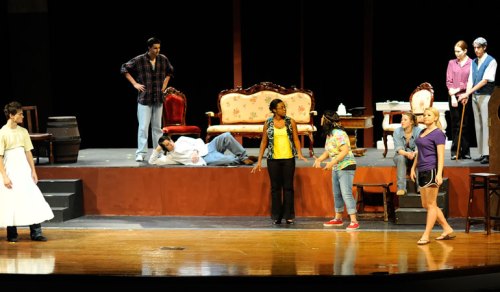 The cast works on a scene from "Charley's Aunt."

Christin is somewhere within the smoke.

The negative exposure compensation even worked well when there was smoke on stage.

Trey "kills" Dracul (Cameron) in a coffin as Jonathan (left) and Alec watch.

Photoshop did play a role in getting the best quality out of these photos. Sometimes I had to add more light, while other times I had to darken a little using Levels. Photoshop wins the award for best supporting actor!

Brian is silhouetted by the actors taking their "Hamlet" bows behind him.

“Laughing Stock” is a comedic play about actors who rehearse/perform three summer stock plays (“Dracul,” “Charley’s Aunt,” and “Hamlet”) in a barn in New Hampshire. During the play, the cast performed “Hamlet” in the background behind a mesh screen. It made for interesting photos!

Christin, Cameron, and Grace take their bows at the end of the play.

All of the actors were extremely talented and put on a very funny performance. 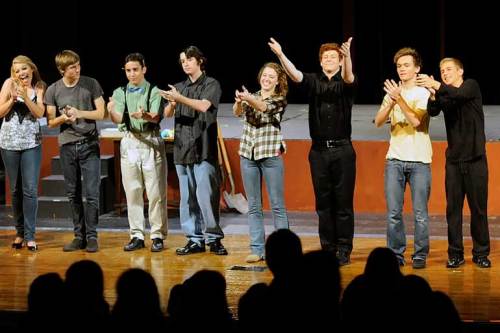 The cast applauds the audience.

I’m sure I would’ve really enjoyed the play . . . if I hadn’t been busy compensating for my photographic exposure!

2 responses to “The Non-Delightful Light Battle; Warning: Eyes May Glaze Over”