The other day when my “third son” Chase and my #1 son were uploading video to the boys’ iMac, I heard one of them say, “Oh, oh!”

Hmmm . . . did some liquid get spilled on the keyboard? Did a video clip accidentally get deleted? Did one of them remember they still had homework to do?

Say what?!? How could that be? The iMac came with a fairly big hard drive of 300 gigabytes. I’ve only used about 60 gigs of my internal hard drive, but that’s because I store all my photos on external drives. Nothing can fill up a hard drive quite like photos from a digital SLR camera. Well, except for one thing—video. Video clips and movies consume lots and lots of gigs.

Chase and the #1 son produce a video at least once a month. They have their own production company, and they make videos that they upload to YouTube and for #1’s broadcast journalism class to be used on the announcements. They’re sometimes crudely crafted, often woefully lit, but usually very entertaining. 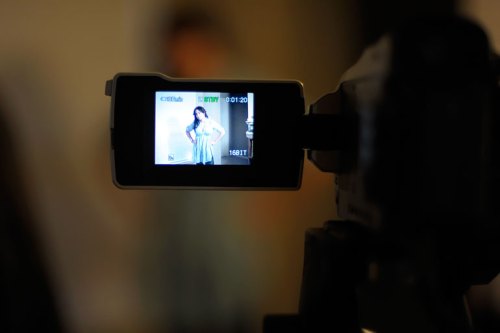 Erika is illuminated in the camcorder's LCD.

The video that the guys were making last week featured an unusual occurrence: There was a female in it. Yes, we actually had a teenaged girl in our house! Of course, I made sure to document the momentous occasion. It might not happen again for quite awhile.

That “lucky” gal was Erika, who is in #1’s broadcast journalism class. She’s also a good sport who didn’t mind playing a witch in the video. 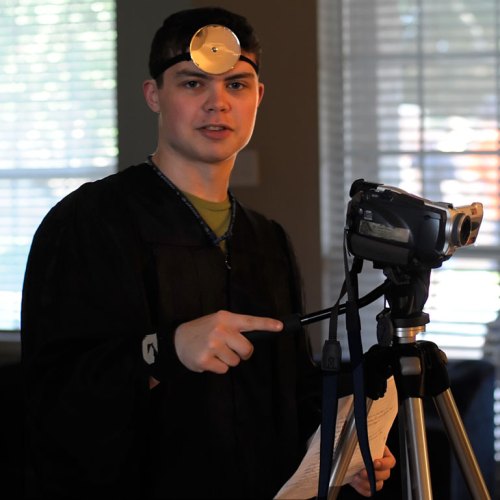 The #1 son—videographer, writer, director, and actor

All that footage that Chase and #1 recorded had to go somewhere. But only part of it could be uploaded to the iMac’s hard drive, because there wasn’t enough room.

Techno mom to the rescue! I drove to Fry’s Electronics the other day to score a big external hard drive for the boys’ iMac (they also have an external for Time Machine backups, of course). Fry’s has a great selection and good prices. I opted for a two-terabyte Western Digital MyBook Studio. I bought the Mac version, because it offers a firewire option, which is a faster transfer method than USB. That comes in handy when you’re uploading lots of gigs of data.

The My Book Studio

The My Book Studio and the old CMS hard drive

See that big hard drive on the right? That was my first external hard drive that I used with my old Apple MacPlus, which had no internal hard drive; I think I bought it in 1986. It held 20 megabytes of storage. No, that’s not a typo . . . it was megabytes. My Nikon D700 produces a 20-meg file at its highest quality (raw). So that CMS drive holds only one photo!

Now here’s the kicker: The cost of that 20-meg external hard drive? A whopping $600! But back in the day, 20 megs held a ton of data, and it was a loyal servant for many years. Slow but loyal.

So now the boys have plenty of storage for their videos. Hope that’s the end of me hearing those worrisome “oh, oh’s!” At least for awhile.