Getting Hooked By a Mystery Series

Like my #1 son, I love to read. I’ve been flipping fascinatingly through pages since the age of four when my older sister Fran taught me how letters formed words, which begat sentences and then books.

But unlike #1, who beat me in learning to read by a year, I don’t have time to sit with a book glued to my face whenever possible (where “whenever possible” = not on the computer). Instead, I usually limit my reading of novels to when I go out to eat lunch solo. Which is why it can take me a long time to finish a book. 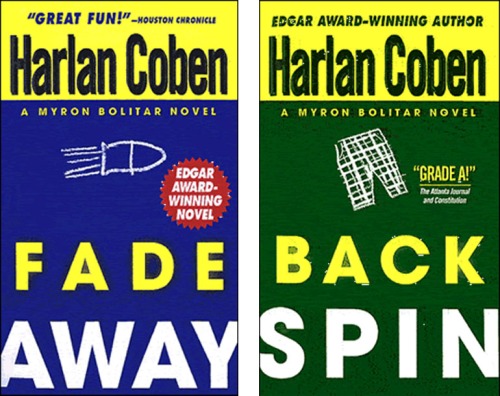 For the last year, my favorite choice of lunchtime reading material has been Harlan Coben’s Myron Bolitar series. If you’re a fan of the mystery genre, you need to check out Coben’s novels. There are nine Bolitar books so far; the first one debuted in 1995, just like my #2 son!

As I noted in a previous blog post, my friend Diane, my nice neighborhood crack book dealer, got me hooked on the Coben books, just like she did with the Janet Evanovich series. I waited about a year before reading “Deal Breaker” and then wondered why I had put off becoming part of Bolitar’s world.

Coben is a master at writing thrillers: His plots are intriguing, his characters are compelling, his writing is tight and humorous. I’ll be reading one of his books several chapters at a time, depending on how slowly I’m eating lunch. Until all of a sudden I’m nearing the end of the book, and Coben has me hooked! I just can’t wait to find out the who, what, when, where, why, and how Bolitar, who is part sports agent and part detective, solves the mystery.

Books five and six (the one I'm currently reading)

I’ve steadily made my way through Coben’s first five Bolitar novels. I’m currently reading number six, “Darkest Fear.” It’s so good and so compelling that I’ve been tempted on more than one occasion to bring it inside from its temporary home in my Honda Pilot and become comatose with it on the couch as I gobble up and enjoy every sentence.

But I won’t (well, until I near the end), because there still are three more Bolitar books to read. Plus, Coben has written eight stand-alone (non-Myron) mysteries as well. I’m set for my lunchtime reading for a long time!