Another Step Towards College Reality

Talk about a combination merry-go-round/roller coaster! That’s what my life was like during a seven-day stretch that included my #1 son’s high school graduation, all-night ProGrad, and three days of college orientation. It’s been dizzying!

Having at least a week before traveling the three hours to San Antonio and being immersed in nonstop information would’ve been nice. However, the early bird gets the better pick of classes at the collegiate nest. So off I went with #1 and my good friend Sue and her daughter Jessika, who also will be attending the University of Texas at San Antonio this fall, a mere four days post-graduation. 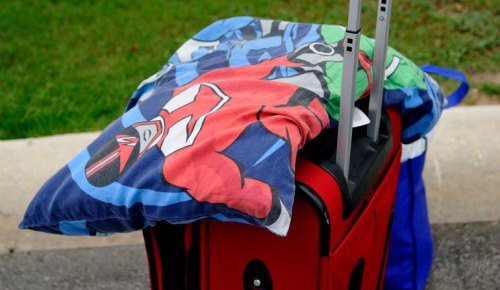 Jealous of my Power Ranger pillowcase?

All four of us opted to stay on campus. First, Sue and I dropped off the grads at the dorm where #1 will be living, and then we went to check in with our suitcases and bedding at the dorm complex across the parking lot where Jess will stay in the fall. Believe me, it’s a sinking feeling when you’re rolling your luggage in front of a large group of parents—especially when your personal effects include your beloved Power Rangers pillowcase (specifically from the Time Force era)—who only are toting smirks.

We soon found out that we actually were staying where the kids were (except for being in different buildings) and could’ve left everything in the car. Lesson learned! And how glad was I that I had left my equally beloved Pokémon blanket at home? 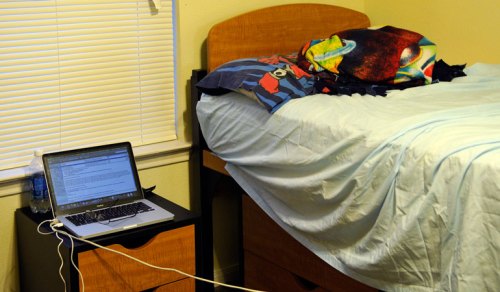 I especially wanted to stay in the dorm to experience what housing will be like for #1. Know what I quickly found out? These college students got it easy! Back in the day, I lived in a similarly sized room at the University of Illinois that housed two twin beds, two desks, and two closets. The bathroom? Down the hall and shared with every female on the floor.

But for #1, he’ll be the only person living in his room—he and his roommate, Ben, have separate bedrooms. They share a bathroom, small living space, and a tiny kitchen area (with a microwave, sink, and a full refrigerator). It’s like living in an apartment!

#1’s room is in the middle of the second floor of this building.

#1’s dorm complex is divided up into multiple buildings. He’s on the second floor close to the pool and laundry facilities.

Wonder how busy the pool will be in the fall?

We definitely didn’t have swimming pools when I was a student at U of I! Of course, it wasn’t summer most of the time there, either.

Freshman orientation wasn’t just about checking out the dorms, of course. #1 endured two days of meetings, getting to know the campus and learning what courses to pick. The parents also sat through lectures and became more comfortable with where our soon-to-be independent grads will be spending an important chunk of their lives. The best part was getting to know other parents and sharing information. The networking was invaluable!

Is #1 ready to start college? We’ll soon find out!

And one more thing: Once students are registered for class, UTSA considers them to be official college students. So #1 walked onto campus a high school graduate, and he left as a UTSA undergrad. Was it just my imagination or was he striding a little taller and looking a bit more confident after his honors advisor had signed off on his 15-hour fall semester schedule?

All I know is that I am not counting down the days until August 22!

8 responses to “Another Step Towards College Reality”