A huge bug crawls up the outside (whew!) of my front door.

“Check out this bug!” I said to my younger son last Saturday morning. “It’s huge!”

The bug continues its climb around my front door (which obviously needs a paint job!).

He took a look and clearly was not impressed.

“You want to see a bug that’s a lot grosser?” he asked. “I’ll show you one in the backyard!”

So I grabbed my Nikon dSLR, which already was equipped with the Nikon 105mm macro lens, and followed him outside to the brick wall. 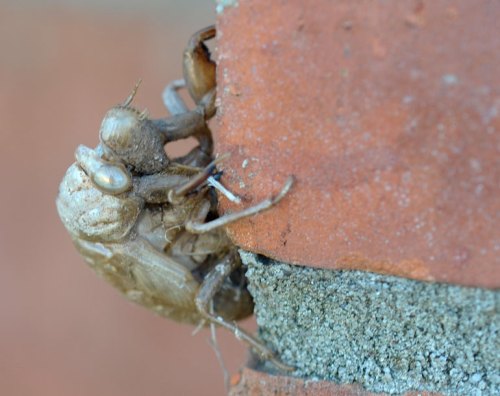 A cicada leaves his calling card.

What my #2 son was pointing at was, indeed, gross-looking. But I still had to chuckle.

“That’s an exoskeleton,” I told him. “It’s what cicadas leave behind after they molt. It’s empty inside.”

I think I won this particular round of bug one-upmanship (hey, sounds like a game show!). I’d rather touch something that used to host an insect than a bug that’s big, scary, and still moves any day! No matter how much it creeps me out.

One response to “Bug One-Upmanship”