Do me a favor: Don’t be dissuaded by negative reviews and not see “Extremely Loud & Incredibly Close.” If so, you’ll have missed a unique, surprisingly uplifting experience. It’s a wonderfully acted movie (you can rarely go wrong with Sandra Bullock, Viola Davis, Tom Hanks, and Jeffrey Wright) that helps us see how people cope with the loss of a loved one and the desire to always stay connected with that person.

Thomas Horn does a terrific job as Oskar Schell, whose beloved father, Thomas (Hanks), dies in the World Trade Center on 9/11. A jeweler, he, unfortunately, was attending a business meeting at Windows on the World on that fateful day. This is Horn’s first acting job; he was discovered when he excelled in Teen Jeopardy. 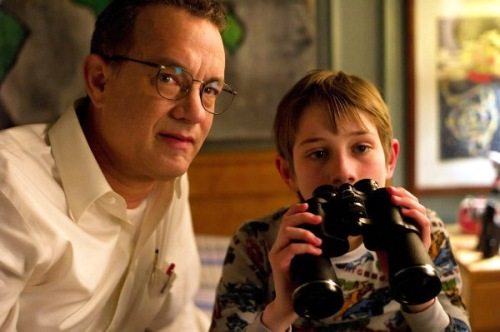 Oskar shares a strong bond with his dad (Tom Hanks).

Some reviewers are put off by Horn’s character, who probably has Asperger’s Syndrome, complete with all kinds of anxieties and phobias. But that’s how he’s written in the book the film is based on (I’m reading that novel by Jonathan Safran Foer now; it’s really unusual). Oskar’s father wants his son to move out of his “box,” so he gives him reconnaissance expeditions in Central Park that force him to talk to people and solve riddles.

After Thomas Schell’s death, Oskar finds a key hidden in a vase in his dad’s closet. Believing that it’s linked to something his dad wanted him to find, the preteen journeys through New York City’s five boroughs, facing his fears one step at a time. Will the key unlock a way for Oskar to always remember his father? 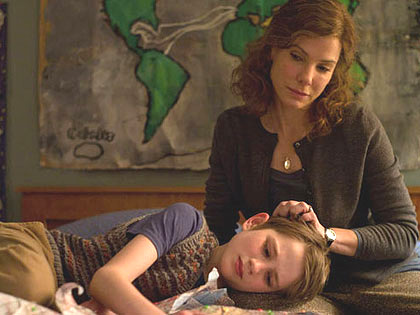 Bullock has the unenviable role as a grief-stricken wife who doesn’t connect as well with Oskar as her husband always did. (I really related to this, because my younger son has such a strong bond with the Mister.) She seems detached from Oskar when he needs her the most. I was dabbing my eyes with a tissue when this was resolved. The ending is simply wonderful.