Lazy Is as Lazy Does (Photographically) 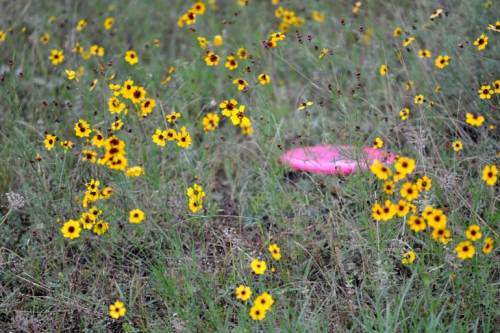 My lame attempt at being artsy: I call it “Disc among the coreopsis.”

Wonder what happens to a photographer when bad weather conditions collide with laziness?

A week ago Tuesday, our local handicap mini disc golf tournament started at 6 p.m. in the rain. Leaving my camera equipment well-hidden in the Pilot, I walked along with my younger son, who was paired with his best buds Eric and Glen, at Tom Bass Park.

When they finished about eight holes, we were close enough to the parking lot that I could grab my gear. The good news? The rain had stopped. The bad? Boy, was it getting dark.

Still, there was enough light that I could’ve run around the course snapping photos of all the participants. After all, I am the mini’s official photographer (my motto is “causing players to miss their putts since 2008”).

But laziness won out over weak, unpaid ambition. The result?

Eric keeps his chin up.

Just a handful of photos of the trio. On the upside, they are the cutest guys of the bunch.