The final standings for our local trivia league (is Beowulf that hard to spell?)

Here’s an update on our family’s trivia team:

We finished the league season, which started in April, in second place, easily qualifying for the semifinals. We managed to compete every Friday night at our local Buffalo Wild Wings with anywhere from five to 11 players, except for the penultimate contest when we tried to help our friends on Blame Canada qualify (which somehow they did despite finishing eighth). Because we scored points almost every time, including one first, four seconds, and one third place, we figured we were pretty good at trivia. Not great, but not mediocre.

Until the semifinals last Sunday. Despite having home-restaurant advantage (it was at our BWW).

The trivia league gods decreed that only five players are allowed per team in the postseason. So we stuck with our immediate family and added Josh, my older son’s pal who has helped us most of the season. It’s too bad Ken Jennings wasn’t available to replace one of us.

We figured the questions would be harder for the semifinals. Harder but not impossible. We were wrong! We had very few lightbulbs shining over our heads during the game.

In the first round, we managed to correctly answer six of the 15 questions. Our shining moment? When Josh and I somehow figured out the name of the whale that swallowed kindly Geppetto in the movie “Pinocchio” (it was Monstro). My older son watched the VHS obsessively for a week when he was five or six years old. That’s a looooong time ago! We finished the half comfortably in 17th place out of 35 teams, 30 of which would advance to Saturday’s city finals.

Then came the second round. When the five of us felt more like preschoolers than college graduates and collegians. We missed a whopping 11 straight questions. We weren’t close on any of them. What didn’t we know? The name of any Tupac song (let alone the right answer, which was “Changes”). That Canada has lots of lakes. That we should have seen “Smash” and “The Three Stooges.” And on and on. We had to laugh so we wouldn’t cry. Nothing was in our wheelhouse.

Finally, Traci, our trivia DJ, lobbed a history question that the Mister and I were able to get the bat on: In 1886, Samuel Gompers formed what organization? I’ve studied U.S. History three times now between the boys and myself, so I knew it was the American Federation of Labor . . . not that I could remember the “F.” The Mister helped out, and BAM! We had our first nine points.

Remember how we dread the lost lyrics category? Fortunately, this time those pesky words sung out to me: “I know just how to whisper, and I know just how to cry.” Yep, one of my all-time faves “Making Love Out of Nothing At All” for nine points plus the two bonus points for knowing it was done by Air Supply. Ahhh!

We made it a third correct answer (out of an embarrassing 15) when the Mister and I remembered that George C. Scott starred as Ebenezer Scrooge in the 1984 made-for-TV-movie “A Christmas Carol.” 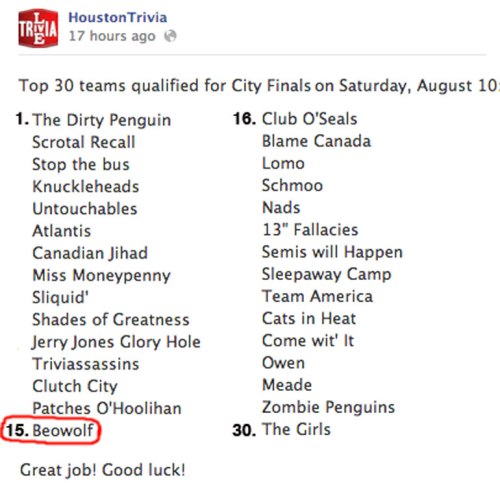 Again, is it THAT hard to spell Beowulf right?

Before the final question (worth from zero to 30 points), we had improbably climbed one spot into 16th place. Obviously, we weren’t the only team struggling. With our place in the city finals secured, we bet nothing (good thing, because we were wrong), and once again moved up to 15th.

So what can we expect as we try to qualify for the August 24th state final? Will it be yet another woeful effort leading to a dismal defeat? Or will we be lucky enough to get enough questions that the three young guns and the two geezers can answer?

And will “Beowulf” ever be spelled correctly?!? Time will tell!