Giving Thanks to Our War Heroes

Ever since last September when I saw that an unusual-looking building had been finished in our nearby Memorial Park, I’ve wanted to check it out.

Yesterday being part of Memorial Day weekend seemed like the perfect opportunity to drive over with the Mister and finally view the Sugar Land Veterans Memorial. 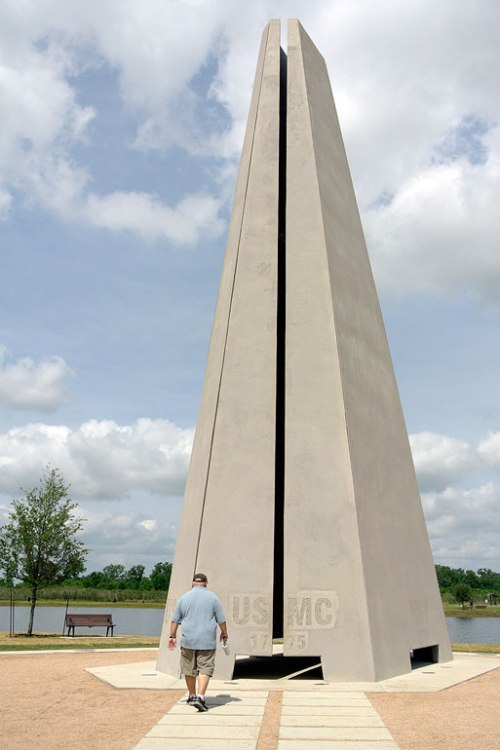 The Mister is dwarfed by the Remembrance Tower.

There’s a much-bigger, better-known Memorial Park in Houston, but that doesn’t make our smaller version any less meaningful. Especially now that there’s a true memorial along the mile-long, crushed-granite path that surrounds a manmade lake.

The memorial is guarded by a concrete flag panel, which serves as a gateway to the 50-foot, pentagonal tower. Each wall features a branch of the military, with its insignia in the nearby sidewalk.

While the outside of the tower looks impressive, it’s what’s inside that truly matters. The entrance is on the lakeside, away from the potential hustle and bustle of the walking path. I was equally jarred by the imposing quiet and the names etched into four of the five panels (none from the U.S. Coast Guard), those from our small community who gave the ultimate sacrifice while serving our country.

I silently prayed for these brave men and their families, as I hoped that our Veterans Memorial never fills up with names.

Every time I pass by the stark flag and building, I’ll always remember that freedom is not free.