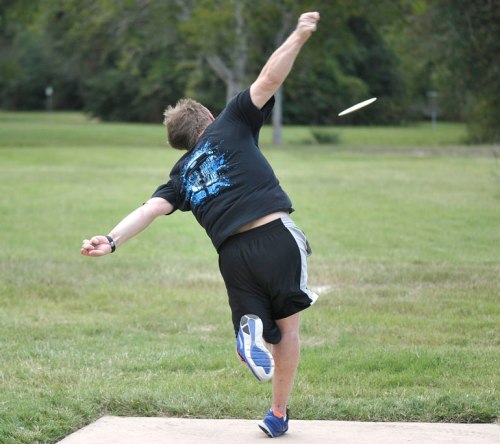 The kid tees off last Friday.

When the Mister and I fondly think about all the people who have positively influenced our younger son, one guy stands head and shoulders from the rest: Jim Hudson. Jim is the reason the kid became a disc golfer.

When Jim worked for the Mister, he encouraged my guys to try disc golf. At the time, our younger son, who was 12 years old, played youth football, Little League baseball, flag football, golf, and lacrosse. As well as preparing for his upcoming Bar Mitzvah and, of course, dealing with seventh-grade academics. (Please note the order these are listed in; that was the kid’s mindset . . . and still is!)

Teeing off six years ago.

Fortunately, the kid had an opening in his athletic schedule on December 1, 2007. Jim told the Mister that there was a disc golf tournament at the First Colony Aquatic Center’s course, and our son wanted to enter it. 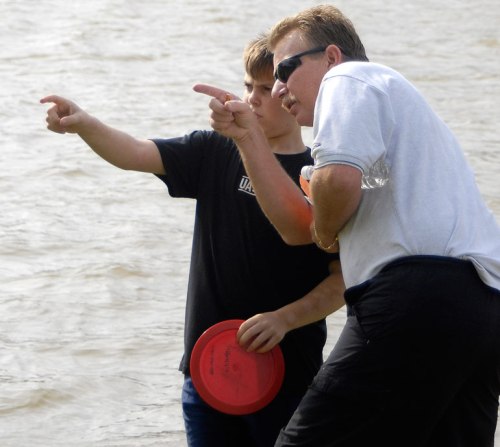 Jim, who couldn’t compete due to a recent surgery, was there to watch and help guide our son. With his many years of playing experience, Jim was able to help the kid choose the proper discs and the best way to throw them.

Needless to say, the kid was hooked! The more he played, the better he got.

And that led to competing in several world championships and numerous tournaments, local and around Texas.

Which brings us to the present day. When Jim found out that our son was coming home for the weekend, he checked to see if the kid wanted to be his doubles partner in a 21-hole tournament last Friday at the Oak Meadow disc golf course in Cypress. Even though the kid had just gotten home that afternoon after the 90-minute drive from Huntsville, he was game.

The Mister and I tagged along, of course, and got to experience our son competing with his mentor. The kid is younger and stronger and easily can out-throw Jim distance-wise.

Jim uses his own putting style from the same spot.

But Jim more than held his own with his blend of savvy and accuracy. They complemented each other so well. I think it was a lot of fun for both of them.

Thanks, Jim, for teaching our son a sport he can play and enjoy the rest of his life!