February Photos of the Day

Today’s big event was renewing the #1 son’s driver’s license. Here in Texas, teens get a one-year provisional license at ages 16 and 17. When they turn the big 18, as #1 will Wednesday, 24 bucks and a 40-minute wait gains them that wonderful six-year license. What I liked best about the experience was how talkative #1 was while we waited in line . . . it was a rare treat that I will cherish!

We are Losties and proud of it! The highlight of my day today? Watching the premiere episodes for the final season of “Lost.” 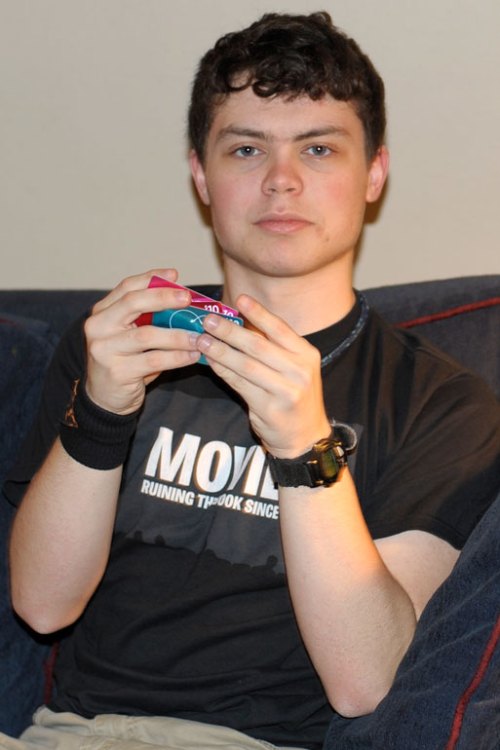 Today is the #1 son’s 18th birthday. The years have flown by! One of his favorite presents? iTunes gift cards.

Tonight the Mister and I pulled on our social pants and went out to dinner in Houston with cherished friends. Our former next-door neighbors, JJ the organizational whiz and Bill, were visiting from Kansas City, so we met them at Hungry’s Café along with our other cul-de-sac bestest friends (T-bird, Lance, Sylvia, and Vic). Sadly, Grace was suffering with a painful big toe, so she and Marcel couldn’t make it. We had a wonderful time! Good food, good conversation, friends for life.

Sidebar: Hungry’s was the first restaurant that the Mister and I ate at together. It’s been a favorite ever since.

Sigh! My thoughts today are with our third car, which the #1 son drives: Our 1999 Mercury Villager. It has about 125,000 miles on it and is nickeling and diming us. So it needs to be replaced by a newer vehicle. Which means more money and more-expensive car insurance. No fun at all!

The Mister and the #2 son played in a disc golf tournament in Beaumont today. When they returned, I met them, Eric, Tracy, and Matt at BJ’s restaurant. The highlight for Eric and #2? Their favorite dessert: The pizookie party platter. Both of them ate most of it themselves!

When we were at Jessica and Eric’s Super Bowl party, their dog Riley was a real people hound. As in a real hope-they-drop-food-on-the-floor kind of guy. I got him to stand still long enough for a portrait by having food in my hand. Which I then ate. Sorry, Riles!

Thanks to the early-January freeze, our front landscaping has been looking kind of  . . . well, dead. And awful. But, thankfully, not all of it. Take these ferns, for example. Some are resting in peace, while others are green as can be. Which gives me hope that the ones that look like goners will, hopefully, spring back to life when the temperatures warm up. I hope!

My boys love white rice. I know it’s not very nutritious, but it’s a favorite food for them (especially with barbecue sauce on it). After I had boiled a bag of rice for the #1 son to eat with his boneless buffalo wings, I noticed all the bubbles as I cooled off the pot. Then I ran to get my camera!

Can you tell we don’t get much in the way of frozen rain in the Houston area? Today we had sleet, but how to document it? The best I could do was capture it cascading off the roof. But even then I felt compelled to circle it so it could be seen! Didn’t want anyone to think it was dandruff. 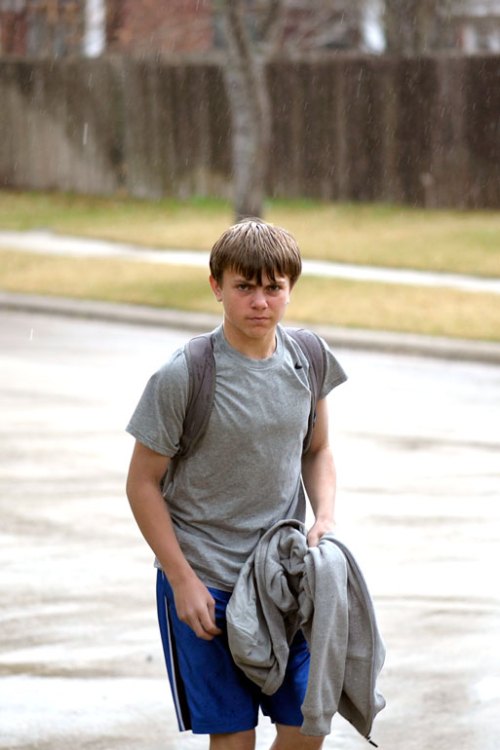 I’ve got precipitation on the brain lately! Today was rainy, which meant the #2 son’s track practice would be cancelled. So I waited for him to come home after riding the bus, hoping I could capture a pic of him and the rain. Success!

When I walked up to take photos of the Water Wall in the Galleria area, I noticed this sign. Beware of killer tripods??

Wearing a fashionable beanie, the #2 son takes a break from his very own version of speed skating to check out ESPN’s Winter Olympics coverage on my MacBook.

These yummy cookies were at a going away party for my good friend Karen C., who is moving to Bahrain soon. I’m really going to miss her.

Today is Presidents’ Day. For the first time in years, the boys have the day off from school. That meant that the #2 son could sleep late (he fell asleep on the couch) . . . and he did!

I met my friend Micki at Chipotle for lunch today and had a wonderful time chatting mostly about photography (one of my favorite subjects!). Then I went to Target to buy a few essentials. The #2 son loves Lucky Charms cereal, especially these handy (but not cost-effective) single-serving sizes. Meanwhile, both the Mister and the #1 son needed some undies. Sorry if that’s too much information!

It’s great having a clean and shiny car, especially when the car wash is free . . . and there’s no chance of rain! 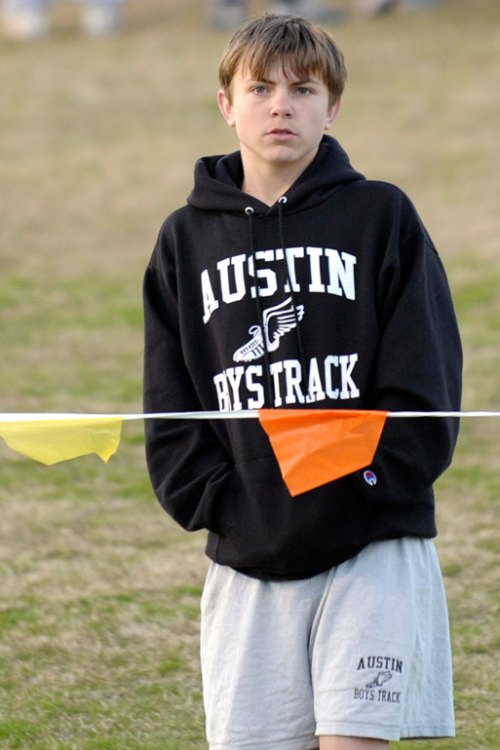 The #2 son only ran in one event—the 800 meters—at his first high school track meet tonight. Usually the athletes have to wait until the entire competition is over before leaving on a school bus, but this event was at our home track. About an hour after he had finished, the #2 son was on the infield looking at us in the stands, begging the Mister and I to take him home. Who can resist those mesmerizing green eyes?!? 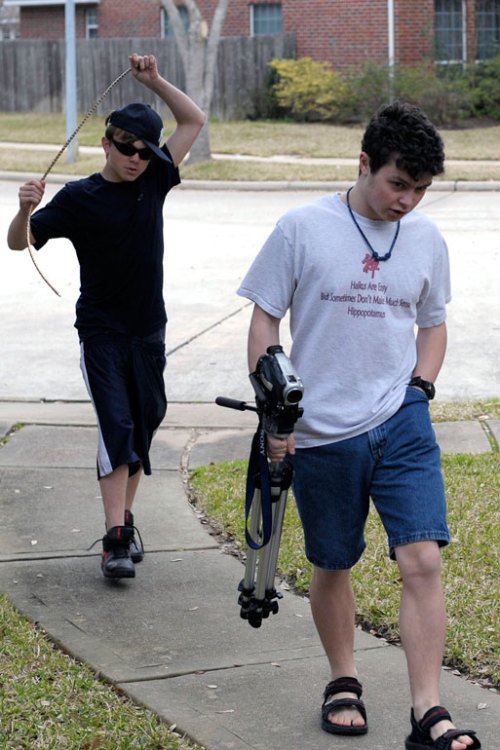 Both boys filmed a video that the #1 son had written. The #2 son plays a rap star (yes, he’s sagging, much to my chagrin). This photo was snapped as they returned home from videoing down the street. 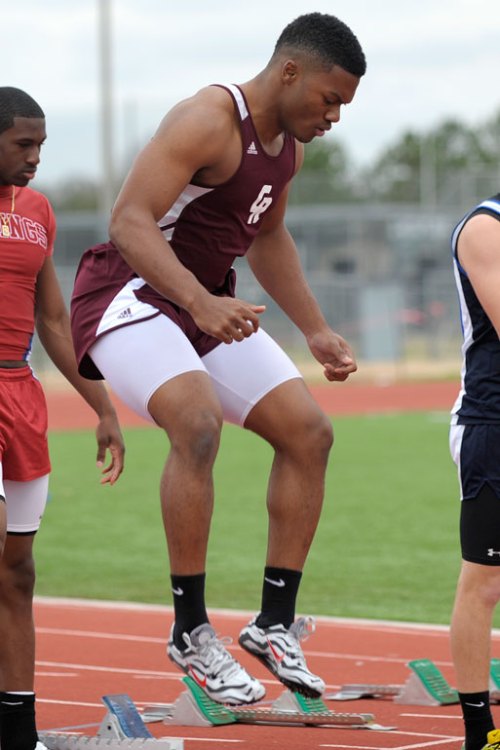 Today I spent a couple hours shooting photos of our high school’s varsity track team. But I must admit that I wasn’t as interested in our athletes as I was of one from a nearby high school. We had dubbed him the “Manchild” back in seventh grade when we saw him playing running back on his middle school’s football team and running track. He dwarfed the other skinny middle-schoolers in seventh and eighth grade and was fascinating to watch as he powered to wins in the 100 meters.

The #1 son was videoing with Chase, our “third son,” in our family room. I managed to capture his rare, beautiful smile and his gorgeous blue eyes in the natural light.

The Mister and I won a camo cake (it went with the hunting table theme) at Saturday night’s ProGrad dinner’s dessert auction. It didn’t last long!

Today’s highlight? Getting my hair cut by Miss Kim. She claimed she was trying to focus on not cutting out a chunk of my hair, as I was focusing on getting her in the picture. But she never did show me how the back of my head looked in the mirror when she was done! 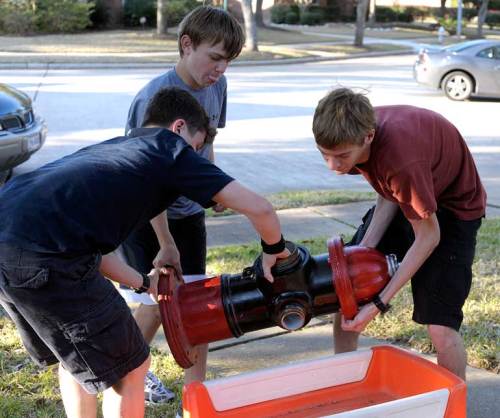 My “third son,” Chase, drove over this heavy fire hydrant that he found at school. He and my #1 son wanted to use it in a video they were making. It took all three boys to lift it into our Little Tikes wagon to bring into the house. By the way, I think we’ve gotten our money’s worth from the plastic wagon: We bought it in 1994! 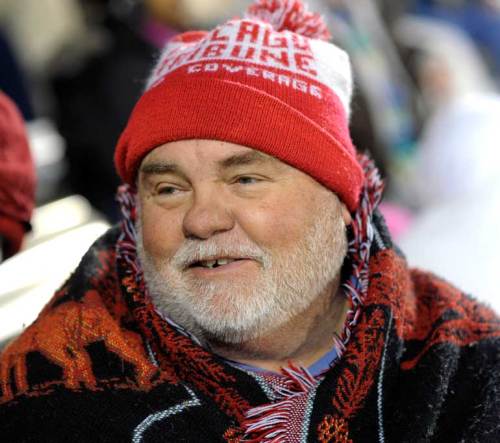 Today I finally got my post-half marathon massage! I had to wait, because Tina, my friend and masseuse, had ganglion cyst surgery and was sidelined. Remember the January 25th Photo of the Day, which was a picture of her colorful left hand? It looks just about normal now . . . no alien massage, thank goodness!

When I saw my neighbor Grace sweeping the leaves and grass off her sidewalk this morning, I had two thoughts: First, her feet really look funny in one sneaker and one flip-flop, the better to protect the loss of her big toenail. Second, didn’t she realize that the gold medal in women’s curling already had been decided? Why was she practicing her sweeping?!?

I think I’ve overdosed on the Winter Olympics!

The Mister and the #2 son spent the weekend out of town playing disc golf. When they got home tonight, #2 was torn between giving me the blow-by-blow of his rounds and watching the Olympics on TV. So he did both!

7 responses to “February Photos of the Day”