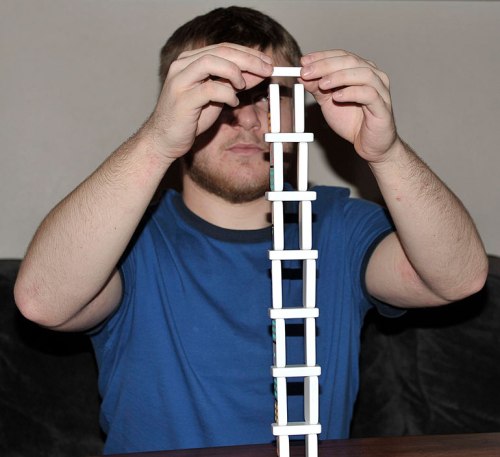 He tried to steady this subsequent try after the first one fell. 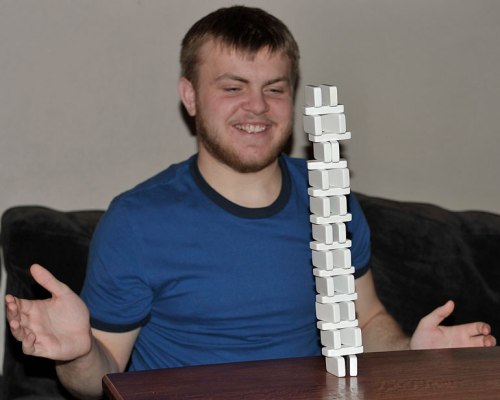 The Leaning Tower of Pisa is doomed, sadly.

Then C.J. got Jake to try his hand at domino construction. 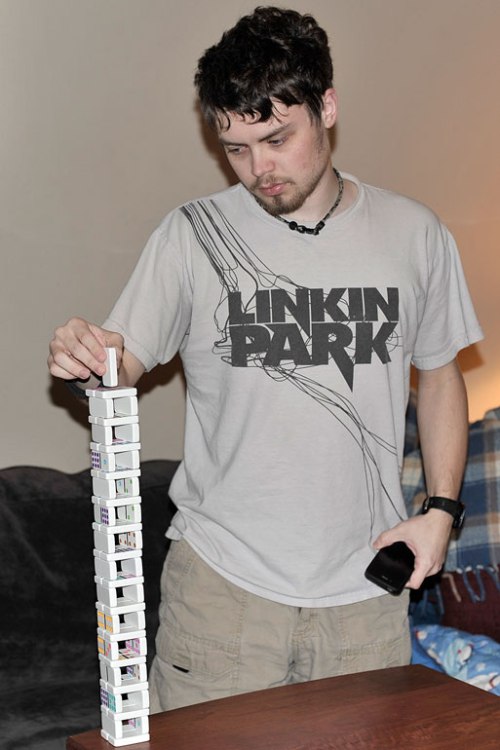 The final tile! Big brother was more successful with his second attempt.

Thar she goes! Little brother enjoyed knocking it down. 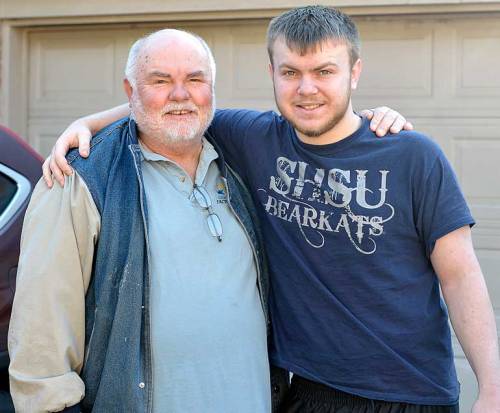 The Mister and our younger son stand side by side, as always.

Hear that sound? Neither do I!

Both my sons returned to their respective college campuses yesterday in anticipation of the start of the spring semester. Which, if you’ve been paying attention, is the final one for my older son, Jake.

First, C.J. packed up his Ford Fusion and left with his roommate, RJ, at 9:30 a.m. for the 90-minute trek to Huntsville. Why so early? They needed to check in at their dorm and then watch the NFL playoff games (one of which was sad for my younger son, who picked San Francisco to lose in his suicide pool; that knocked him out).

The sun bothers our older son’s eyes and my Nikon D700’s light meter.

Two hours later it was time for Jake to start the three-hour drive back to San Antonio. In this senior year of “lasts,” we checked off “last winter break.” I’m sure he’ll miss the four weeks of lazy days gaming with friends when he’s a working man.

I must admit that after three and a half years, I’m used to Jake coming and going during the school year. But my baby boy, the college freshman? Not so much. And I’m not so sure that I want to have it feel familiar. Before I know it, both boys probably will be out of the house, and I’ll always experience what greeted me this morning once the Mister left for work.

Good luck with your spring semesters, my sweet sons!

After I had snapped two photos on New Year’s Eve of my sons holding their parts of a 2014 sign and smiling (do you believe in miracles?!?), C.J., my younger son, asked to see what they looked like in my Nikon D700’s LCD.

Once done comparing them, he told me I could use the second pic, which is the one I posted in yesterday’s blog. Mission accomplished . . . or so I naively thought.

But when he saw the photo posted to Facebook, he was a little upset.

“That’s not the one you were supposed to use,” he said.

I guess I’ll add “mind-reading” to the list of skills I need to accomplish in 2014. 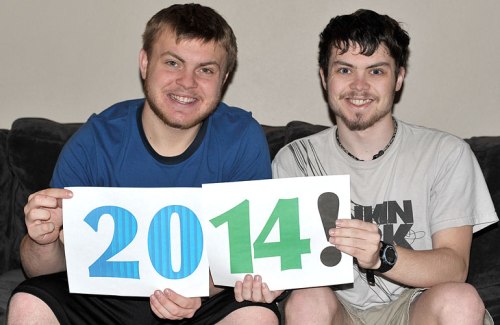 So I went back and processed the first photo (aka the one he supposedly rejected). I think he and his older brother look cute in both pics. But as long as the kid is happy, it works for me (unhappy boy = lousy pix).

My sons ring in the New Year by posing for me.

Jake in the dining room; note his brother on the right side of the MBP screen.

But, apparently, it’s much too big for my sons. Last Sunday when I was sitting in the family room near my baby boy, I could hear him talking to someone on his MacBook Air.

“Who are you Skyping?”

He laughed. He was actually Skyping his brother, who was in the dining room! We do tend to text each other in the house, but Skyping? How lazy can you get!

The answer? Even lazier! Soon my older son walked into the family room toting his MacBook Pro and sat on the couch next to his little bro. Where they continued to Skype one another.

Looks like he’s happy to be home and back in his spot.

Now that my older son has returned from UTSA for his winter break (he drove home last Friday), our family is complete once again. My heart is full to the brim.

One of the first things that Jake does after he walks through the front door is set up his 2010 MacBook Pro in his spot at the far end of the dining room table. That’s been his computing comfort place since he first got his laptop after he graduated from high school three and a half years ago.

Looking at the above photo, I figured that I would check my archives to see how Jake looked with his MBP during his first collegiate winter break in 2010. 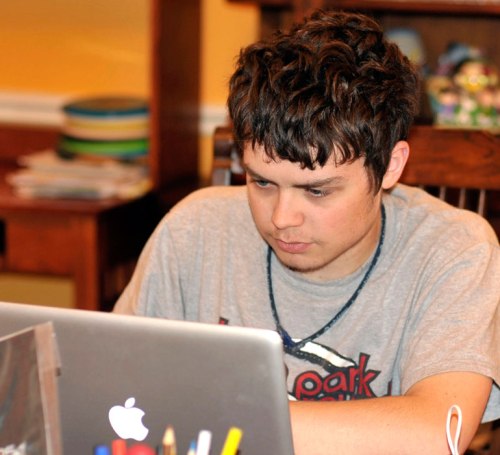 And here he is! What stands out most to me?

First, he’s staring down at the screen. He didn’t like having his photo snapped back then. Now he almost always looks at me and smiles. Love seeing those beautiful blue eyes!

Second, his face has changed so much! From the mere stubble of 2010 to the cute never-quite-filled-in beard, his features are more angular and adult. He’s definitely grown up.

Third, ironically, he’s wearing the exact same shirt in both photos! Yes, it does look faded now, but my Linkin Park fan continues to show his loyalty. As well as his penchant to wear the same t-shirts over and over and over again. How very male of him!

It makes me wonder what the photo of my sweet boy will be like next December. This is his final winter break, continuing his streak of “lasts” this senior year. Hopefully, Jake will be settled in an apartment (perhaps with his BFF, my “third son,” Chase) where he’ll have a new special computing spot.

One thing’s probably certain: I wouldn’t be surprised if he’s still wearing that Linkin Park shirt then!

One Down, One to Go 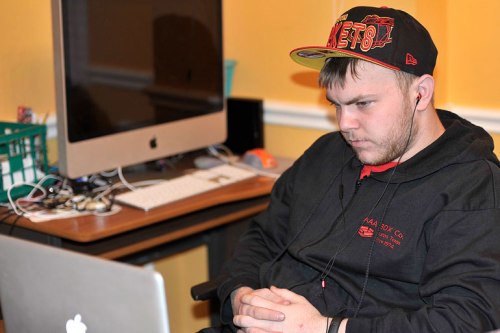 Not hiding from me but not willing to look at me, the kid studies our MacBook.

My younger son arrived home from Sam Houston State yesterday afternoon. He nicely and neatly put his many things in his bedroom instead of flinging them in the dining room. Could he finally be growing up?!?

I ultimately will judge by the towel factor.

He was watching the Charlotte Bobcats’ game (his favorite team).

Meanwhile, we await his always-neater older brother (though also neat-towel-hanging-challenged), who has his last final tonight and will drive home from UTSA tomorrow. Then we’ll have four-plus weeks of togetherness during their long winter break. Four weeks of late nights and late wake-ups (for the boys), laundry, friends, clutter, and chaos.