This has been my toughest year as a parent . . . possibly my hardest year ever, and it all relates to my younger son’s anxiety problem. That psychosomatic issue has kept him homebound and in online high school his junior year (so far). No aspect of it has been positive for our family. The stress on all of us has been off the charts.

I’m sure that eventually I’ll conclude that this sad, often-heartbreaking journey has made us all stronger. Couldn’t calcium pills accomplish the same thing, though? 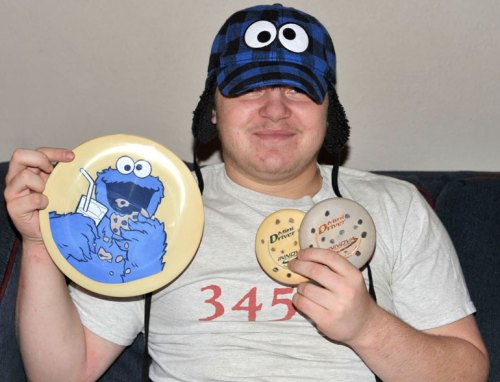 My #2 son poses with his holiday Cookie Monster goodies.

We’ve found online high school to be extremely difficult, especially for an unmotivated boy. I think only two percent of high school students can be successful with this way of “learning” . . . and they’re all girls. I put the “learning” in quotes, because without a physical teacher, it’s hard to become competent in one subject let alone six of them.

Here’s a quick update as we blissfully end 2011 and look forward to a happier, healthier 2012 for my younger son:

• He’s almost ready to take his driving test. The trusty, old (1999) Mercury Villager sits waiting for him in our driveway.

• He’s completed four of his online courses. He needs to finish his Physics work and take finals in that class and U.S. History.

• He’s going to return to his old high school next week for second semester. Not that he wants to go back, but the Mister and I think it’s what’s best for him. Our job as parents is to guide our children, to embrace their strengths. We feel like we’re enabling his weakness when we let him stay home instead of facing his fear. We know it’ll be tough for him, and he might even hate us . . . for now. But one of my biggest regrets this year has been not fighting to keep him at his public high school for the fall semester; I don’t plan to make that mistake again.

• We’ve found a wonderful psychiatrist who has prescribed anti-depression medication that seems to be lifting his spirits (it’s supposed to lessen his negative thoughts and anxiety). He still won’t talk to a therapist, but at least he’s taken one big step towards getting back to his old self.

And, oh, do we miss my younger son’s old self! He was warm, bubbly, happy, almost always seeing the glass as overflowing. His eyes were bright with possibilities, and he always made us smile. Those grins have been in short supply in 2011. Let’s hope positivism rules our family’s world in 2012!

Run for a Reason 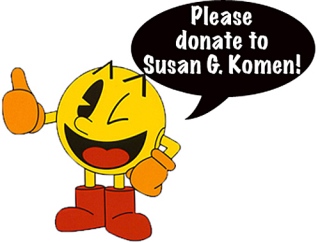 Listen to Pac-Man (he gobbles up cancer cells)!

Looking for a great tax-deductible cause as 2011 comes to a close? How about contributing to my fundraising effort? As I’ve noted before, I’m running the January 15th Aramco Half Marathon in honor of my friends Sheri and Janet E., who are battling breast cancer. Just click on the link below and help the Susan G. Komen Foundation make a difference:

Happy New Year’s Eve! All I can say about 2010 is . . . what the heck happened to it? One minute I was ringing it in and posting my first photo of the day, and the next minute I’m looking back at the year in my rear view mirror. Zoom, zoom!

My wish for one and all for 2011 is good health and happiness. Let’s make this our best year ever!

A snail visits in a timely manner.

Sidebar: I snapped the snail photo this morning! I just happened to see the little guy hanging around near my front door. How fortuitous!