Some of what I was supposed to be working on.

While the Mister and our younger son were in Rochester, New York, last week for the Amateur World Disc Golf Championships, I had one main goal: Finish decluttering that son’s bedroom.

We finally got rid of the too-tall captain’s twin bed that he and everyone who slept on it hated, opting for a Tempur-Pedic full-size mattress set. My #2 son suffers from insomnia, so we hoped the better bed would help extend his 40 winks (and it has!). But that meant we had to get all the junk out of his room so we could fit in the bigger furniture.

When they left, I only had a few more boxes to look through. I so wanted our little big guy to come home to a more-peaceful sleeping environment.

Where have you been all my life?

Instead, I became a Gleek. Am I late to the party as usual?

The addiction started innocently enough, as it usually does. With Netflix raising its prices, I wanted to see if it would be worthwhile to keep the streaming part of the service (I already knew we liked getting DVDs in the mail). Last Friday afternoon I fired up the Apple TV and looked for something to watch. What should pop up as a possibility? “Glee.”

I had seen one episode on Fox but never got hooked on the series, probably because it airs at the same time as other shows we like to watch. And even though I loved “High School Musical,” I wasn’t sure that I wanted to invest time in a Disney wannabe.

I’m sure glad I pushed those apprehensions off to the side. “Glee” rocks! I like how the songs fit so well with each show’s theme. It was easy to get fully invested in the characters. I also enjoyed most of the song covers; the cast is full of great singers. However, there is a little too much of that Auto-Tuning going on. I wonder if that device would make even me sound good! Probably not.

“Glee” made me think back to when I was in high school; timely thoughts considering that my reunion is looming next month. I could relate when Finn said, “We’re all freaks . . . but we’re all freaks together.” As a full-fledged dork way back when, I can truly identify with some of the things the “Glee” kids experience.

My favorite show was the final one when the kids sang “To Sir With Love” to Mr. Shuester, and he reciprocated with one of my all-time favorite songs, “Over the Rainbow.” I had tear stains on my Old Navy shirt!

Netflix is a great way to catch up on a season’s worth of TV shows (in this case, 22 episodes). There are no commercials to disturb the flow. It doesn’t take long to get through a season.

But Netflix does make it easy to just sit on the couch, glued to the big-screen Samsung. I endured a marathon session over two and a half days, finally finishing the first season with enough time to complete the decluttering before my older son and I picked up our weary travelers at the airport yesterday afternoon.

Late to the Netflix Party 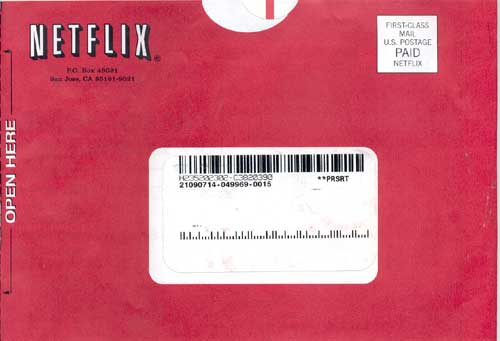 We love seeing this red envelope in the mail!

It’s entirely possible that we’re the last family on earth (or at least in the United States) to join the Netflix phenomenon. Why was I clinging to our now-defunct Hollywood Video and soon-to-be-defunct Blockbuster memberships?

I guess I’m just old-fashioned. After all, I still remember all the mom and pop video stores that dotted Chicago where I bought my first VCR back in 1980. The world was filled with VHS tapes, and all was easy to figure out.

But times have changed. I’ve watched our local Blockbuster make the transition from VHS to DVD. Now with Blu-ray threatening to knock DVDs off the video throne, I knew it was time to get with the program.

So I decided to go with the flow and sign up for Netflix. It has so much great content! But I didn’t want Netflix just for the DVDs. Video now is being streamed to smartphones, iPads, computers, and TVs; it’s just a matter of time before physical media like DVDs and Blu-ray discs are given the boot. Which meant we needed a device that would allow us to stream Netflix on our HDTV.

Enter Apple TV! For a mere $99, this little hockey-puck substitute is a streaming giant (though it weighs less than a pound). It sets up easily and allows you to select video content from iTunes and Netflix. There are so many “free” movies on Netflix! My #2 son and I immediately watched “The Sandlot,” which is one of his faves. Since we’ve added the Apple TV and Netflix to our household, we’ve been watching season six of “The Office,” which we missed last season, as a family. It’s been fun exploring all the video possibilities that are at our Apple TV fingertips.

Of course, we still like watching DVDs every now and then. We’re on the one DVD out-at-a-time plan, and so far we’ve watched . . . one movie. What was our first Netflix choice? Did we go topical and edgy? Total laughs? Drama and Kleenex? Gosh, did we even opt for a flick we’d never seen?

We’re fans of Woody, Buzz, and the “Toy Story” gang!

After we saw “Toy Story 3” last summer in the theater, my younger son said he wanted to watch all the “Toy Story” movies back to back to back. And that’s exactly what we’re doing.

The next DVD waiting for us to pop into the player: “Toy Story 2!”