The Mister Hits a Homer 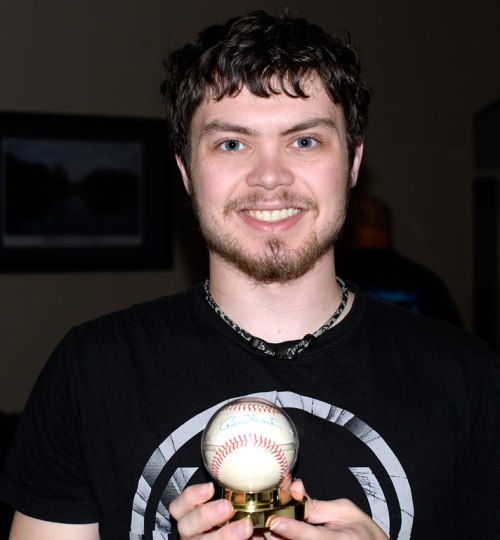 During spring break the Mister asked Jake a supposedly innocuous question: If you could have an autograph from any major league baseball player, who would it be?

Our older son, who boasts an encyclopedic amount of useless baseball information in his gray matter, didn’t hesitate one bit.

After the boys returned to their respective college campuses, the Mister asked me what we were going to give Jake for his upcoming UTSA graduation. Naturally, I thought being debt-free should be enough. However, the doting dad had other ideas.

And that’s why the day after we returned from watching our pride and joy walk across the Alamodome stage, Jake opened one unique present from us.

Yep, it was a baseball autographed by the one and only Billy Martin, scored by the Mister on eBay.

Jake was thrilled! “Most people wouldn’t understand how meaningful this is to me,” he said, as he inspected the signature. “It will always be special to me.”

You’re special to us, sweet boy!

Posted in baseball, college, Jake, the Mister, University of Texas at San Antonio

When I look at this photo of my younger son lighting his menorah Sunday night, one thing pops out at me: Wax. Lots and lots of the sticky stuff all over the back of the candelabrum. Obviously, we don’t do a good job cleaning them once Chanukah ends. Talk about your waxy buildup!

Nestling the shamash back in place.

Maybe we’ll do a better job this year.

I always like when I can surprise my sons with their gifts. My younger boy didn’t have this warm cap on his list, but I knew he’d want it, because he likes anything warm (he hates being cold). Plus he’s a huge Cookie Monster fan! 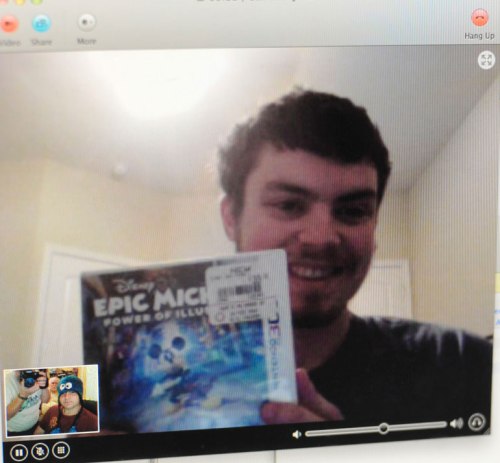 Yet another videogame for my older son

Of course, a list is the best way to ensure that you’re giving the kids things they want. My collegian put together a collection of desires from videogames for all our current Nintendo systems  to ones for his and his brother’s hoped-for big present: The new Wii U. As well as a watch, books, and gift cards.

Little bro’s list was smaller, but one item stood out very large: A Pedro Martinez jersey. He didn’t really care which team it was from (the three-time Cy Young Award winner and eight-time all-star played for five of them) . . . but I did! There was no way I was going to allow anything with the words “New York Mets” (aka the sworn enemy of all Cub fans) in my house. No way!

The kid shows his Skyping big bro his gift.

Fortunately, I was able to score a used (but it looks new) Martinez Boston jersey via eBay. Pedro helped the Red Sox win the 2004 World Series.

The kid is a Red Sox fan, making his third-night gift very special. Pat on the back for mom! 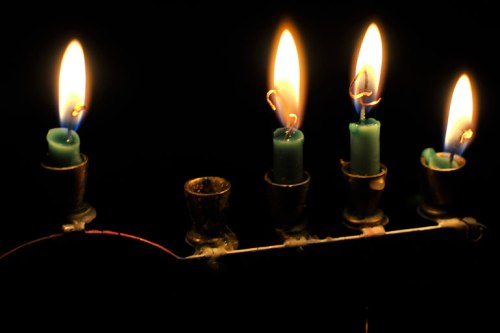 The third-night candles are burning low.

So what will tonight bring? One thing’s for sure: Even more wax on the kid’s menorah!