The Mister and I pulled on our traveling pants (big pockets for lots of snacks) Saturday and yesterday and put about 560 miles on the Honda Odyssey.

Our goal? To take our sons out to lunch at their individual colleges.

Our older son was first on our list. Saturday we drove the 190 miles to San Antonio, picked him up, and went to see “We’re the Millers,” which was surprisingly good despite the awful, woeful, disgusting abundance of foul language, even by Jennifer Aniston (you’re better than that, Jen!). Then we enjoyed lunch at Buffalo Wild Wings and chilled for a bit at his nice apartment.

Finally, the Mister and I hugged our senior collegian goodbye (we probably won’t see him until Thanksgiving) and made the three-hour trip back home. We lightened the load by attempting to harmonize to songs played on Sirius XM’s the Bridge station. Usually putting that capital L to our foreheads, though, is the Mister’s inability to remember most of the lyrics despite his fine singing voice coupled with my out-of-tune pipes despite knowing most of the words.

Our finest moment? Our rendition of Jimmy Buffett’s “Margaritaville.” Even Simon Cowell might have been impressed! And, yes, we were 1 for what seemed like 236 songs. At least we weren’t shut out!

RJ and the kid

Yesterday we pretty much repeated the procedure, but without the movie. Fortunately, Huntsville is only 88 miles from our house; it takes about 90 minutes to get there. We picked up our younger son and his roommate, RJ, at their dorm and made the scene at Chili’s, which was their choice. 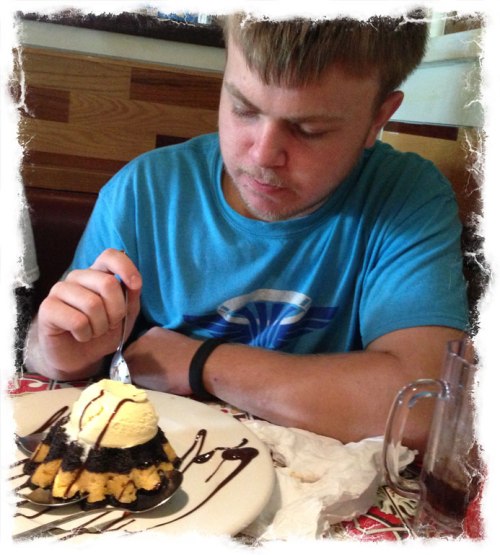 Naturally, the kid needed a molten dessert pick-me-up. It doesn’t take much to raise his spirits, thank goodness. After a stop at Walmart and a small disc golf course to play a few holes, we returned to Sam Houston Village. There we deposited the boys, gave our freshman a hug (we’ll see him a few times this month thanks to disc golf and SHSU football games), and then it was back to our horrible harmonizing.

Whew! Glad we don’t have to labor on Labor Day!! 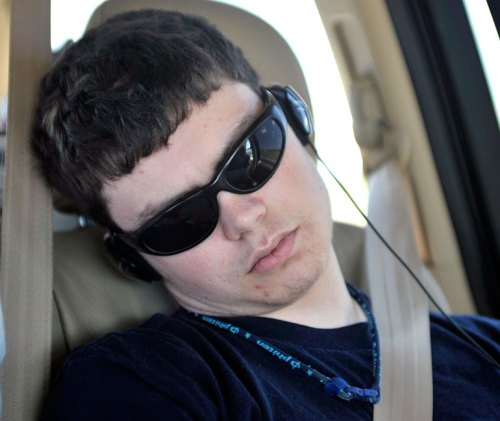 Could my #1 son be dreaming about his independence?

As I type this, my #1 son has been away from hearth and home since last Saturday. Somehow we got all his necessities into the Mister’s Honda Odyssey along with a hand truck from our company and set off for the three-hour trek to San Antonio by mid-morning. We only had to return to the house once to retrieve a few important yet forgotten items. Fortunately, we were only 15 minutes down the road.

Being well-organized has never been our family’s strong suit!

Moving #1 into his dorm at the University of Texas at San Antonio was easy—it helped to have the four of us plus two strong alums and, of course, the dolly. Wheels make everything move better! It was very much appreciated in the almost-100-degree heat that we only had to make one trip from the car to the room. 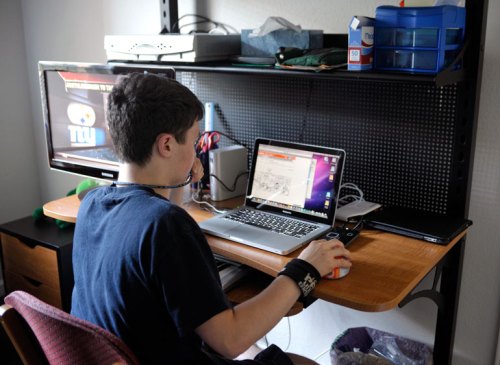 #1 uses his MacBook Pro at his dorm desk—just like home!

My #1 son is very fortunate that he’s in a relatively new dorm that’s like an apartment complex. Much to his relief, he has his own bedroom. 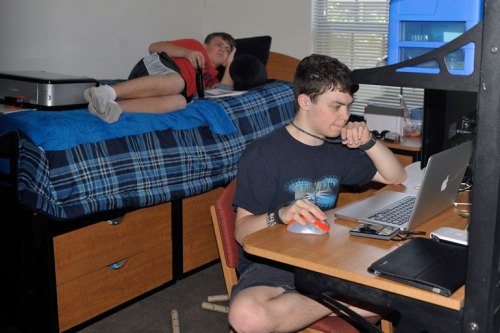 The twin bed is up high to fit drawers underneath it.

No longer is he sleeping in a bunk bed. No longer will his younger brother be annoying him from the top bunk. No longer will he hear me yell from my office, which shares the wall with his bedroom, that the two of them need to settle down and go to sleep. 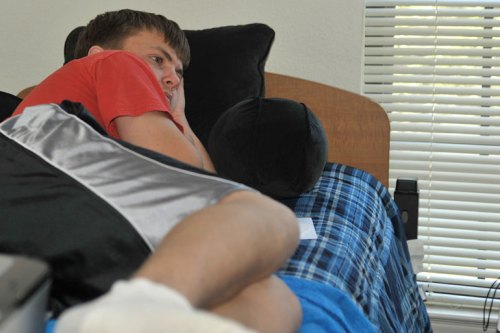 My #2 son makes himself at home.

#1 is a free man . . . as long as he makes good grades, of course! Now he has a new set of responsibilities and priorities.

But he wasn’t worrying about that last Saturday. Getting his room set up to his liking, as well as filling his half of the drawers and cabinets in the bathroom and kitchen he shares with his roommate, Ben, took center stage. He would spend his first night alone as a college man in his room . . . while the the Mister, our #2 son, and I cooled off at a nearby motel.

Personally, I was too exhausted to become emotional at the thought of leaving my beloved #1 son behind the next day after we shopped and walked the campus. As Scarlett O’Hara so aptly said, “I’ll think about that tomorrow.”

Posted in college, family, University of Texas at San Antonio

It started last Friday. I had dropped my #1 son off at a local junior college to take the CLEP test to try to get credit for freshman composition (I drove, because I had to pay for the test with a credit card). We were told it would take at least two hours to finish, so I returned home and parked my 2009 Honda Pilot in the driveway in a shady spot. A short time later, I got back in the Pilot with my #2 son so I could drive him to meet our friend Glen to play disc golf. I tried to start the car. It made a noise, but the engine wouldn’t turn over. Oh, oh!

As I was pondering my next move, #1 texts me to say he was done with the test (which included an essay) . . . after 35 minutes! Oh, oh! Fortunately, we have another car, the Mercury Villager #1 drives. Unfortunately, it was behind the Pilot in the driveway

I looked at my #2 son sitting quietly beside me in the Pilot and said, “Someone’s going to have to push this heavy car into the street.” I knew if the Pilot could just clear the driveway, I could maneuver the Villager around it. Competitive lad that he is, he jumped out of the car and ran behind it. And, as you can see from the crudely drawn graphic above, darned if he didn’t shove the Pilot just enough into the street that 1) no oncoming car would hit it, and 2) I could drive around it.

I called AAA Texas to come and try to figure out what the problem was with the Pilot, drove #2 to meet Glen, and then picked up #1 (fortunately, he always has a book to read just in case he’s ever stranded by his mom for more than an hour).

AAA Texas sent out Sam, who also couldn’t start the Pilot. But he did notice that the key icon was flashing on the dashboard and determined that the problem had to do with the car’s security key. AAA towed it to the Honda dealer. John the service advisor finally decided that the Pilot’s immobilizer needed fixing. Really? How much more immobilized could my car be?!?

Of course, there were no Pilot immobilizers to be had in all of Houston . . . nay, all of the great state of Texas. One was overnighted from the plant in Ohio . . . where it apparently sat at FedEx in Houston, not to be delivered to the dealer until Monday. Meaning I didn’t have my car all weekend. Extremely annoying!

So that meant I was sharing the 1999 Villager with my #1 son. I used the red minivan Monday to run errands. After shopping at Kroger, I put the bags into the back of the car, got in the front seat, and proceeded to turn the key.

The Villager’s dashboard: Nothing to see here.

Yes, yet another call to AAA Texas and the chance to sit in a hot car for 20 minutes waiting for service. Oh, and while I was waiting, John from Honda called with an update on the Pilot. Even after putting in the new immobilizer as well as a new battery, the car wouldn’t start. So for the second time in a year, the Pilot needs a new starter. Why was I suddenly thirsty for lemonade?!?

As you’d expect, none of the Honda dealers in Houston stocked a Pilot starter; it had to be overnighted from Dallas. Joy of joys!

Meanwhile, AAA’s Henry came to my rescue. The good news was the alternator was fine; all the nickel-and-dime machine needed was a new battery. Soon I was on my way home.

When Honda John called again yesterday, I literally held my breath. Would I ever get my Pilot back? Yes! The maroon mobile finally was ready to roll. The repairs were under warranty, so all the aggravation cost was my time. I’m just glad we have an extra car.

When I slid into the seat of my Pilot after that long four-day absence, I immediately sought out the one thing I truly had missed while driving the old Villager: XM radio! Oh, how I yearned to once again listen to the ’60s on 6, ’70s on 7, and my other favorite stations. I had forgotten how many commercials inhabit FM radio; it’s so irritating.

I’m hoping that my “carma” is on the upswing now. But just in case, I’m trying not to drive the Mister’s Honda Odyssey!