The Old Man and the (Younger) C

Roger’s pitch is on its way to the batter.

As the mom of two precious boys and married to a man who also adores them, I’m a sucker for father-son bonds.

Sidebar: Which is why the scene between Kurt Hummel and his father on last night’s “Glee” premiere left me crying.

Koby was steady behind the plate.

So when our friend Eric asked if we wanted his two extra tickets to see Roger Clemens pitch to his oldest son Koby for our Sugar Land Skeeters, there was only one response: Absolutely! Especially since it was Bollywood night complete with amazing post-game fireworks. Minor-league baseball doesn’t get any better than this! 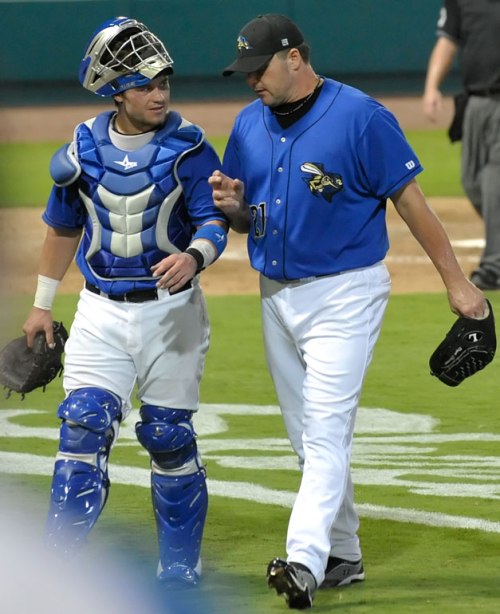 Father and son chat while walking back to the dugout.

Our younger son already was going to the game with his friend Ricky, sitting in the outfield lawn section (which is not for old folks like the Mister and I, who have a tough time getting up without a forklift). When we saw that there were empty (albeit season-ticket) seats in our row, I told the boys to join us and get closer to the action. 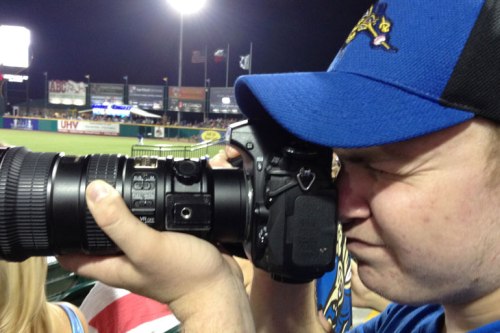 The kid looks good behind the Nikon!

Wanting to be just like mom (or maybe he wanted a better look), my son took my Nikon D700 complete with Nikon 70-200mm lens and started snapping away at Clemens the elder on the mound.

This was our view of Roger from our seats on the first-base side.

He did a great job capturing Roger rearing back with the ball! I might need to turn over the big equipment to the kid more often.

As manager Gary Gaetti walks out to yank Roger, father and son hug on the mound.

Fortunately, I was behind the lens when Roger exited the game in the fourth inning. Before leaving, he and Koby shared a wonderful hug that got me reaching for a tissue. This was the first time the son had caught his seven-time Cy Young Award-winning father in a professional baseball game. It truly was a special moment for all of us lucky enough to witness it.

Toby Keith sat in the Skeeters’ dugout for most of the game.

The Clemens duo might have been the attraction that night, but our little city drew a celebrity to the game: Toby Keith. The country-music star is a pal of Roger Clemens, and he attended to support his buddy. I thought he looked great in his own Skeeters’ jersey! 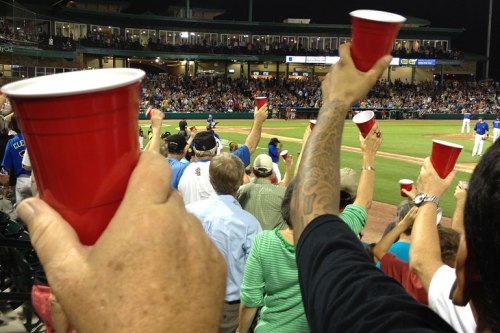 Let’s have a party!

The Skeeters’ management took advantage of the appearance by passing out red Solo cups to the fans to hoist when Keith was introduced. I just wish they had made them useful by filling them with Diet Coke. 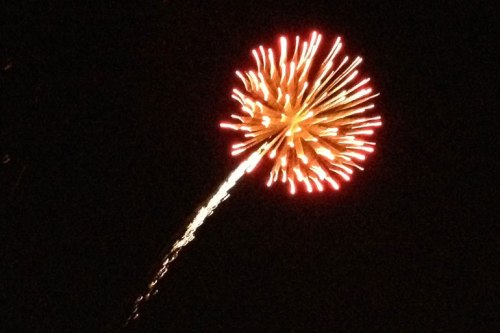 The fireworks look good to my iPhone 4S.

The hoopla continued with Bollywood-style dancing, the usual condiment races, the spirited singing of “Yellow Rose of Texas,” and those great fireworks. And the best part of all?

A 4-0 Skeeters’ win, with Roger Clemens getting credit for the victory, as well as sharing the experience with his own precious son. 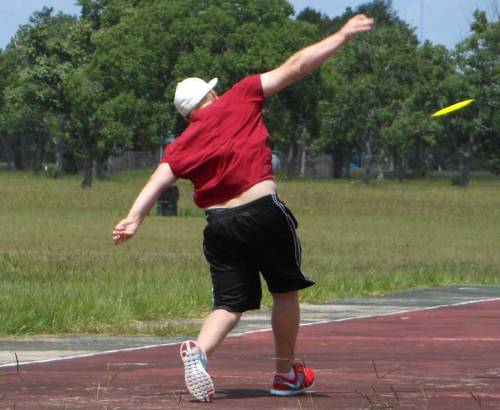 My younger son warms up before a practice round at Tom Bass Park. (Nikon S6200)

I’m missing the kid this week. He’s in Charlotte, North Carolina, competing in the Amateur Disc Golf World Championships. The Mister, who I’m sure hasn’t dared to wear his embarrassing paint-stained Land’s End Super-T (with pocket) again, is in charge of driving our younger son to the courses, massaging his sore right shoulder, and boosting his ego.

I watched this kayaker smoothly navigating the lake in our neighboring master-planned community during a recent wog. Made my chronically sore shoulders hurt just snapping the pic. 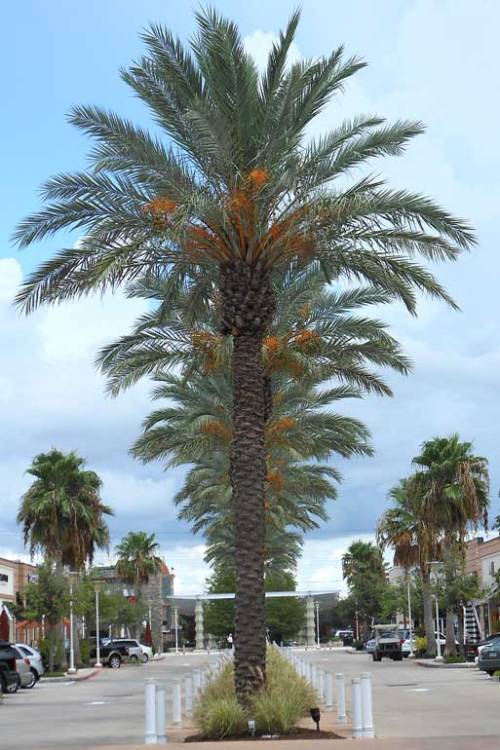 I was intrigued by this line of palm trees in the median outside our local mall. Kind of looks like one tree with lots and lots of fronds.

I think Texas corners the market on beautiful sunsets.

I felt sorry for this poor, pitiful, lonely, sloooooow cup. I took this photo at the Sugar Land Skeeters’ baseball game during a between-inning “race” pitting a pepper, a taco, and this sad-sack cup (gotta love minor league games with their corny activities). The cup took a loooooong time before finally reaching the third-base dugout (from the warning track).

Could Usain Bolt win dressed as the cup?

It made me wonder whether even Usain Bolt, Jamaica’s world-record sprinter, could run speedily enough in the cup costume to finally beat the dastardly pepper and taco.

Probably only Bolt could make the cup truly fast food!

My Take(s) on iPhone Self-Portraits 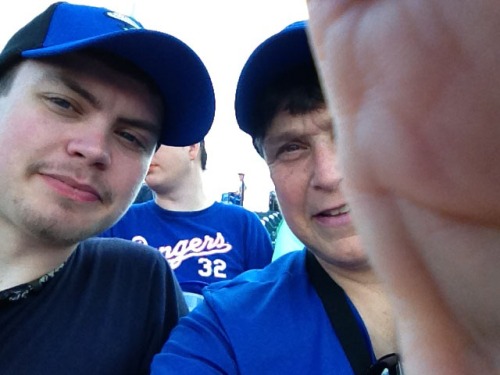 Some people are great at snapping self-portraits and group photos with their smart phones.

Sadly, my friends, I am not one of them. I’d like to offer up as an excuse that I’m used to the heft of my Nikon digital SLR, but that’s weak. I simply don’t have the necessary skill set . . . and it doesn’t look like I’m developing it any time soon, unfortunately. 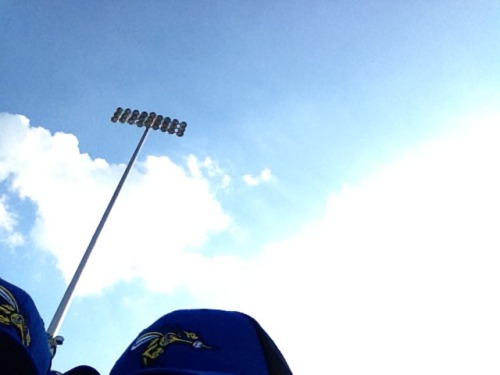 My older son and I attended the minor-league contest, mostly to see good baseball (we won 8-0!) but partly to score free Skeeters’ caps, which was the giveaway. Once we were in our seats, I figured I’d snap a pic or two on my iPhone 4S of our smiling, hatted heads so we always could remember the occasion.

Not at all! Even though the iPhone lets you see what you’re shooting, I kept goofing up. The shutter wouldn’t snap when I wanted it to. So frustrating . . . with such woeful results.

I finally managed a halfway-decent shot before my #1 son lost his wonderful smile and patience. But as you can see, I have part of my hand in the pic, the backlighting makes us too dark, and the background is distracting.

Enter Photoshop! The first step is to crop. The second is to lighten. And the third is to select the background and blur the heck out of it. 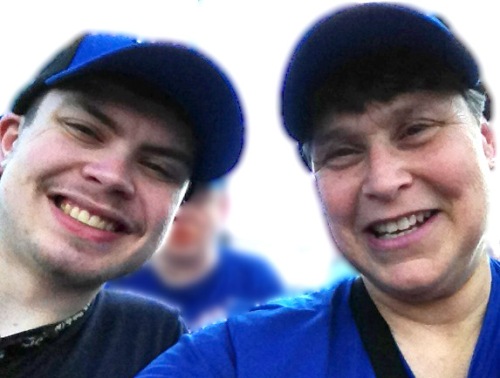 Not perfect but much better!

While it’s not quite suitable for framing, it is a nice memento of mom and son together.

Too bad you can’t really see much of those darn caps!

An overturned canoe waits for passengers along a nearby lake.

My iPhone 4S came in handy for snapping a couple photos last Sunday. Both remind me of still life paintings . . . not that either will be hanging in an art museum any time soon.

When I saw the canoe resting by the lake during my morning jog, I felt compelled to document it. It sure looked lonely. 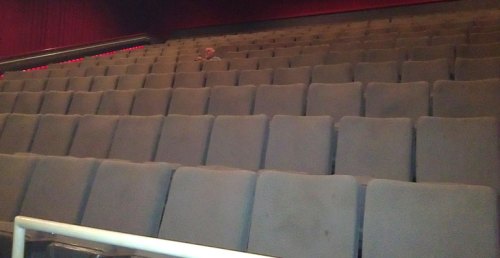 It’s hard for the Mister to hide in an empty theater!

Later that morning, the Mister and I went to see “Extremely Loud & Incredibly Close.” When we got to the theater and saw more cars than usual at 10:15 a.m., he became anxious, believing that all the people were there to see the same movie (we try to avoid crowds; that’s one reason we go to morning matinees . . . well, that and being cheap, of course).

As you can see, he was wrong. As I laughingly took the photo, I couldn’t help but compare the Mister to that old, battered canoe. Both of them seemed so isolated and in need of companionship.

The canoe will have to wait for its passengers. The Mister? He had me . . . and eventually about 10 other people scattered around the theater.

The early-morning sun warms the water. (All photos snapped with my iPhone 4S.)

It’s easy to feel gratitude when you’re out walking or running, especially early in the morning.

This double reflection looks like I used a sepia filter (but I didn’t).

Something about being ambulatory among the birds and flowers gives you that “glad I’m alive!” feeling. Only the possible threat of calls to the police stops old off-key me from joining in with the songs I’m listening to on my iPod Shuffle (that and the fact that I would need an oxygen tank as I lumber along). 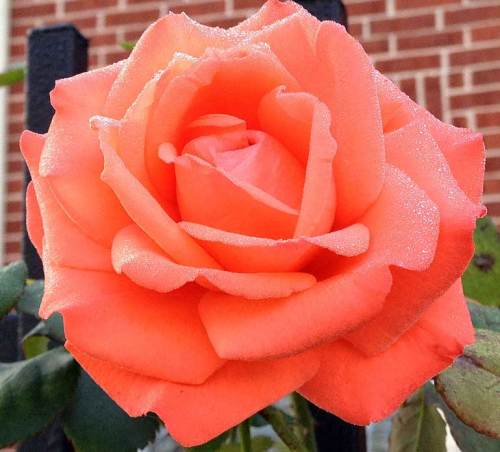 What a beautiful rose!

While I was jogging through an eight-miler last Saturday, my heart was filled with gladness. My precious younger son made it through all four days of high school! He finished homework every night and didn’t complain at all when I dropped him off every morning and when I picked him up each afternoon.

This morning he returned for his second week, again without a whimper. Could anyone feel more grateful than I do right now? 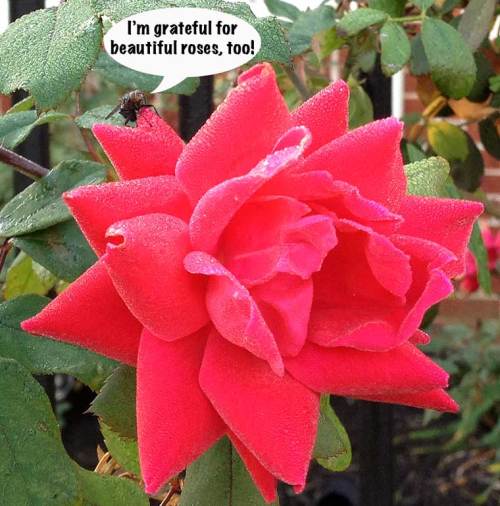 People aren’t the only ones who love roses.

The Houston area is doing its best imitation of a New England fall right now. 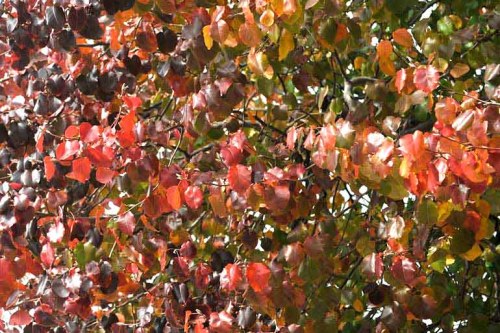 We don’t want the cold, but we do appreciate the gorgeous colors in mid-December.

It’s wonderful to walk around our neighborhood and see this explosion of brilliant hues.

Too bad the pretty leaves already are “leaving” their branches.

Whether I’m snapping photos while walking with my Nikon D700 or with my iPhone 4S at the end of a 10-mile run, I come to the same conclusion:

This tree features a cornucopia of fall shades. (iPhone 4S)

This is a pretty time of year to be living in Houston! It almost makes it worth putting up with our torturously hot summers. 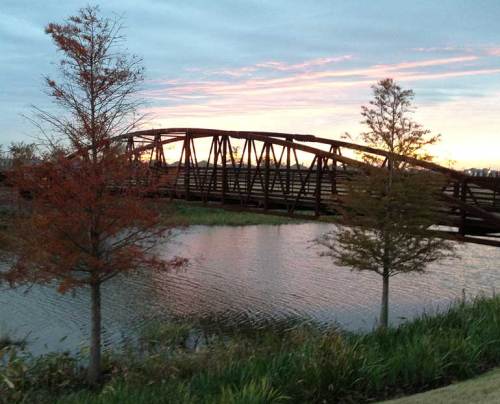 I stopped mid-jog to snap the gorgeous sunrise with my iPhone 4S last weekend. 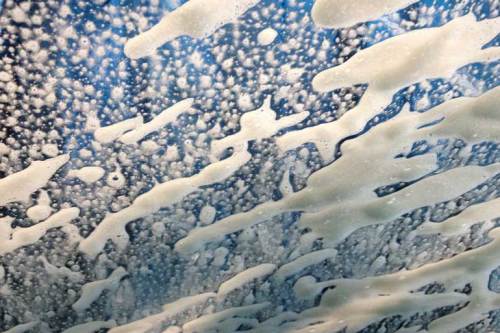 The windshield gets sudsy.

Know what’s fun to do as you sit in your car during an automated wash? 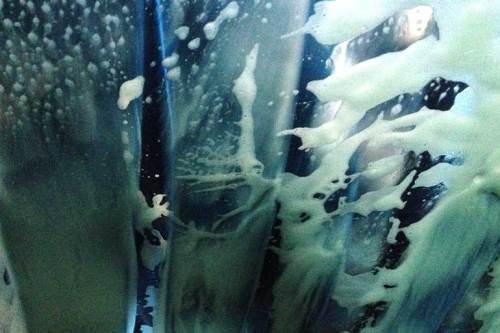 Brushing off those suds on the windshield.

Take photos with your iPhone 4S! 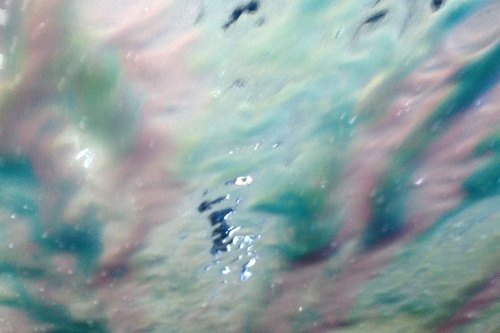 My Honda Pilot has needed a good bath for months now. With a Groupon for a local car wash about to expire, it seemed like a great time to finally own a clean vehicle. 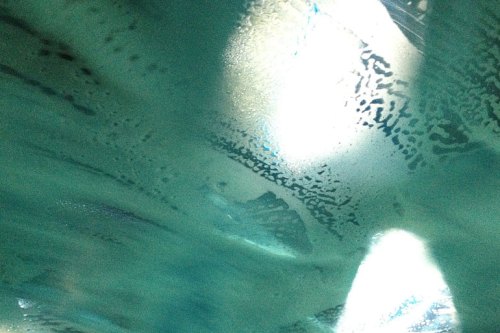 As I was snapping away, one thing became crystal clear (well, besides my windshield eventually):

The car wash is a colorful experience! There are no dull, lifeless moments.

Is that the grungy light at the end of the tunnel?

All is merry and bright once again! 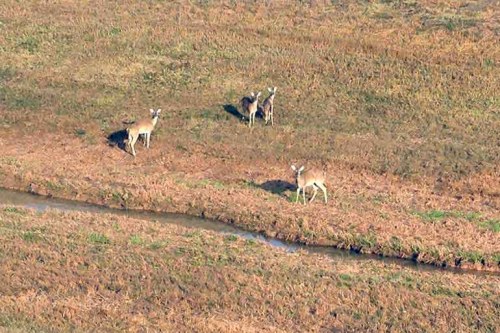 Deer along our little bayou warily watch me as I walk by this morning. (iPhone 4S)

Oh, deer! Hope there are no hunters around!!