Green socks for a “green” boy.

Here’s what you need to know about “The Odd Life of Timothy Green”: It’s a cute, PG movie that probably will make you cry. 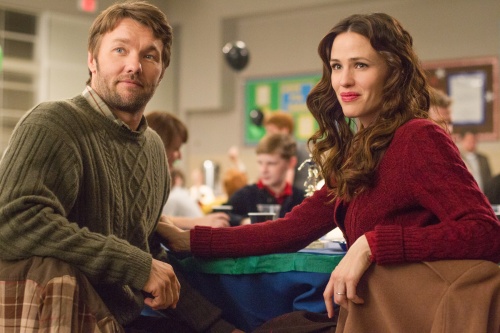 Jim and Cindy Green yearn for a child.

The story takes place in Stanleyville, which is the pencil capital of the world. Jim (Joel Edgerton) and Cindy Green (Jennifer Garner) have reached the end of the line in their attempts to conceive a child. So they write down their hopes and dreams for a fantasy child, place the papers in a wooden box, and bury it in the garden. It rains that night . . . only in their yard.

Lo and behold, a muddy, 10-year-old boy (CJ Adams) appears in their house. His name is Timothy, and he has green leaves growing near his ankles. He’s everything his “parents” (he calls them Mom and Dad) wrote on the papers . . . but not always in the way you might think. Those were pleasantly unexpected twists.

Timothy manages to change the lives of everyone around him. He’s quite taken with Joni (Odeya Rush); their scenes together are some of the best in the movie.

This isn’t one of Disney’s finest films, but it’s definitely enjoyable, whether you see it in the theater or via DVD. I’d give it two and a half stars out of five.

Which brother will you root for?

Seeing “Warrior” with the Mister yesterday was a no-brainer, because the man does love him some MMA (Mixed Martial Arts)! I was interested in seeing the movie, because I thought maybe it would be as good as “The Fighter.”

Sidebar: At first, I typed “Mixed Martian Arts.” Wouldn’t that be fun to watch?

Although well-acted, “Warrior” could be called “Brawler.” It’s definitely not in the same class as “The Fighter.” Not even close. But it is very violent; it had me cringing in my cushy theater seat.

“Warrior” is a dysfunctional-family film about two brothers (Brendan and Tommy) and their formerly alcoholic, abusive father, played by Nick Nolte. At first, I thought Nolte might have stumbled into an Oscar-nominated role, but he mumbles through his lines and sort of falls off near the end. 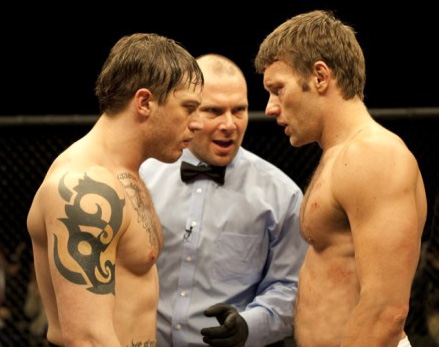 Which brother will win?

Brendan (Joel Edgerton), a high school physics teacher with a wife and kids, and Tommy (Tom Hardy), an ex-Marine with a secret, both fight in a big MMA tournament, with a winner-take-all prize of five million bucks. It’s not a spoiler (or a stretch, for that matter) to say that, of course, they end up in the finals together. When that happened, I whispered to the Mister, “I’m not sure who I’m rooting for.”

What I was rooting for was for the crescendoing music near the end to stop and quiet down! So loud and obnoxious!! I think we can figure out for ourselves when there’s a key moment without a musical cue, thanks.

“Warrior” is rated PG-13 for swearing and violence. I gave it three out of five stars.