Who's hiding behind the baritone?

Remember that high school football game I shot last Friday night under the lights? You didn’t think I would forget about taking pictures of the band and dance team now, did you?

Especially since the boys’ high school’s marching band and Angels dance team are worth the price of admission . . . even when our football team is struggling. 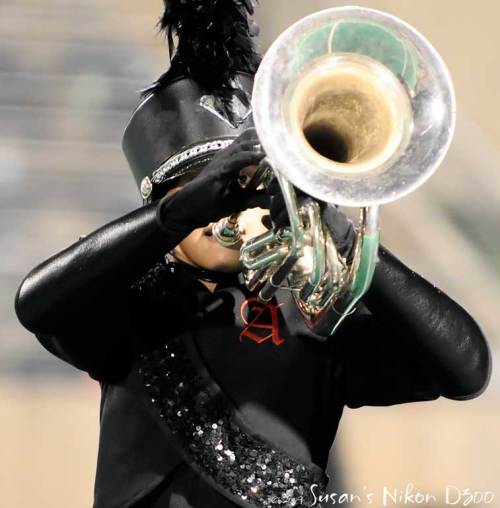 The baritone horn sounds great but reveals little of the musician's face!

I was as excited about shooting photos of the band and Angels with the sideline pass as I was football. These kids are some of our school’s best athletes! The musicians are able to play while marching to and fro, backwards and sideways, all without knocking down any of the dancers. And the Angels are leaping about while staying out of the way of the big tubas. It’s entertainment at its very best!

But for a photographer, it can be an exercise in frustration. Take the poor lighting causing you to shoot at high ISOs (I was at ISO 2000 even wide open at f/2.8 with my Nikon D300 and Nikon 70-200mm lens). Then add to it hats pulled down so the musicians’ eyes are shaded and horn bells that can completely cover up the players’ faces. I’m not trying to take photos of musical instruments for catalogs, for goodness sake! Faces are everything.

A better shot of a baritone player

It meant that I had to shoot some of the musicians a little off center in order to not have their instruments obscuring their faces. It was an interesting photography lesson in patience and timing for me.

Alex gives the baritone his all.

And I also got a lesson in some of the different face-obscuring instruments, thanks to my “half” son Chase, who is a marching band veteran. So now I know that the first four musicians pictured are playing the baritone horn. Chase says it looks similar to the mellophone, which is a marching French horn but sounds deeper. Who am I to dispute that? I just take the photos.

Here’s the euphonium, which I like, because the bell doesn’t block faces. But look at that hat shading his eyes! Sometimes you just can’t win when it comes to snapping band photos.

As long as you don’t shoot straight on, you easily can capture the trumpeters’ faces.

Those piccolo players? Piece of cake!

The Angels are on their toes!

Our Angels dance team adds some color to the production. Plus it’s easy-peasy to see their faces! 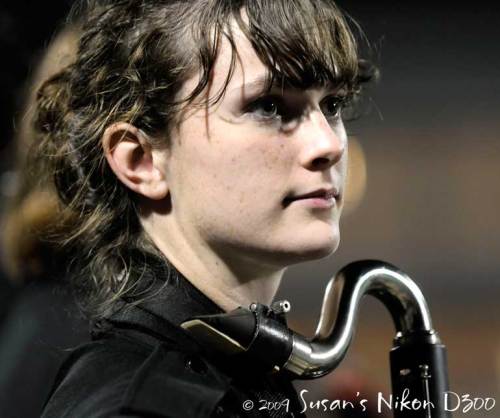 Of course, I didn’t just shoot the show on the field. I also snapped some shots where the musicians were sitting in the stands. 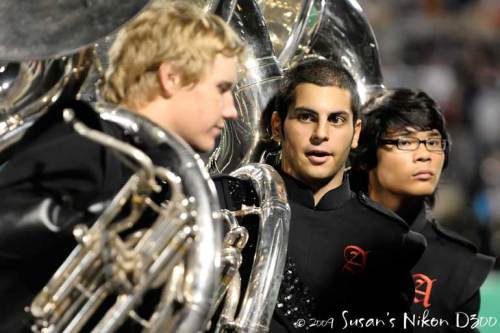 Tuba players call it a day.

And I took pics as the band was getting ready to leave with their instruments—away from their faces.

The real fun of shooting—and watching—the band is trying to pick out your favorite musicians. Like this character, none other than Chase. He’s fairly easy to find, because he’s tall and lanky and plays a big instrument, the bass clarinet. But sometimes in the midst of all that movement that’s the hallmark of every marching band, we lose him in the madding crowd. 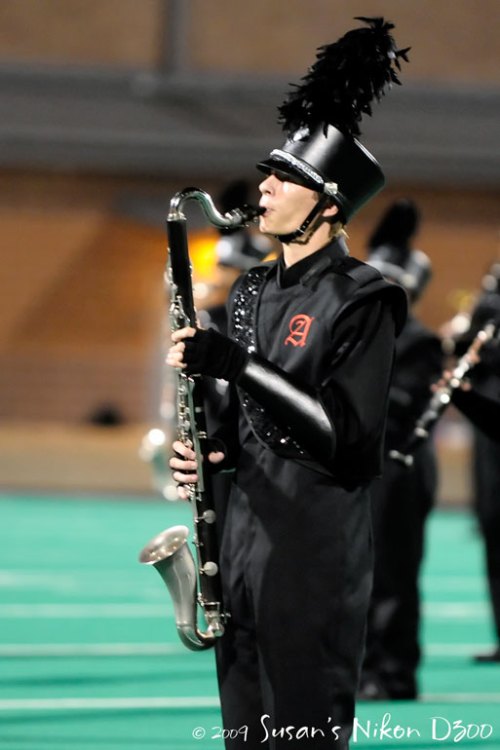