My younger son holds his older brother (via the iPhone 4’s FaceTime)!

I had been lamenting about our first Chanukah season without my older son ever since the beginning of the year. Noticing that the holiday would come early, I realized all too soon that #1 would be at college for every night that we light the menorah’s candles.

A sobering thought for a mom who loves making memories with her kids. How would I take my usual 1,001 photos of both of them?!?

My #2 son looks at his brother on their iMac after lighting the first-night candles.

Fortunately, there’s plenty of technology that makes it easy to be up close and personal with the ones you love. At first we looked to FaceTime on our iPhone 4s. However, #1 reported that the picture was freezing up, so we turned to their iMac that lives in the dining room. Which is where our menorah is lit.

#1 holds up his first-night gift (note the reflection of the two candles in the monitor).

Skype also wasn’t cooperating all the time, but we managed to make it work. My older son was happy to receive Super Scribblenauts, a video game he wanted for his Nintendo DS. That should help take his mind off next week’s finals . . . hopefully without interfering with studying for them! 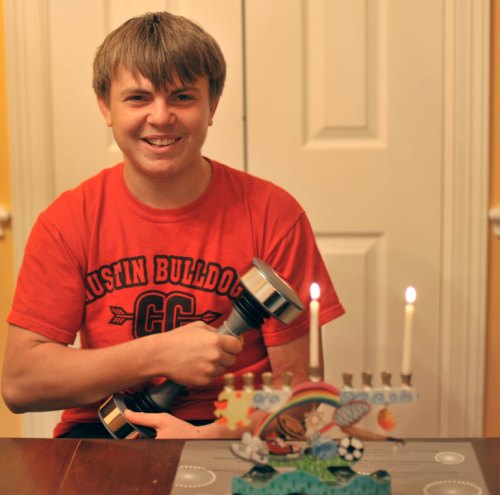 His younger brother got a gift that he wanted: A Shake Weight. Got to build those biceps and triceps!

I would never say that video-chatting is the next best thing to being there. Nothing really is close. But at least my older son could feel like he was a part of our traditional ceremony . . . and I got to see his beautiful blue eyes and rare smile once again. Can’t wait to video-chat with him again tonight! 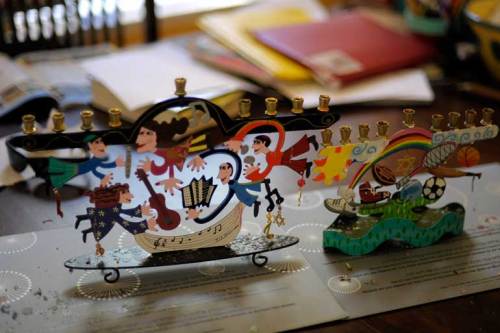 Chanukah ended Friday night. And here it is Tuesday. The boys’ menorahs still haven’t been totally de-waxed so they can be put away. My #2 son started getting the wax out of his menorah’s candleholders yesterday until the lure of Monday Night Football was too great. Storing the menorahs is definitely on today’s to do list.

Sidebar: I realize that calendars claim that Chanukah ended Saturday. Yes, that was the last day, but we only celebrate the holiday at night. It’s all about lighting the candles after sunset for us!

The boys photographed at a different angle.

On that eighth night, #2 told me my Chanukah photos were boring. That they all looked alike except for the number of candles.

Fair enough, my young critic! So I knelt down to get the above photo and . . . his older brother has a candle flame for a nose!

But look at the third candle from the right on #2’s menorah!

My wild child has a wickedly wild candle! Amazing at any angle!!

The festival of lights on the radio

Sirius XM radio has a great holiday tradition: Radio Hanukkah. Every day of the holiday brings festive Chanukah music 24/7. It’s great fun to listen to. Well, except for one thing: There aren’t nearly enough Chanukah songs to fill even one day of programming! The station tries to compensate by playing any song that has Hebrew in it (holiday appropriate or not) or is sung by Barbra Streisand, or so it seems.

Radio Hanukkah got so lucky this year, because a guy named Evan Taubenfeld penned “Merry Swiftmas (Even Though I Celebrate Chanukah)” in which he professes his wish that Santa bring Taylor Swift as his gift. I think the station showed great restraint in not playing that particular song several times an hour!

The island’s laminate was no match for the burning Chanukah candles.

Gather ’round, my readers, and I shall recount a tragic Chanukah tale of many years ago.

It was the eighth night of Chanukah. The boys had lit their menorahs on our kitchen’s island. The #2 son had made a menorah mat in Sunday school, but #1 had not. So his menorah rested on a now much-lamented dish towel. I know, I know . . . what was I thinking? Well, I was hoping that the candles would stay in their holders!

As I was sitting in the family room, #1 walked through the kitchen.

Casually, as if he were just trying to make conversation, #1 said, “The island’s on fire.”

I jumped to my feet and ran into the kitchen. Sure enough, a candle had fallen from his menorah and had set the towel on fire. But not so much that I couldn’t easily put it out.

When I lifted up the towel, I was dismayed to see several holes and burn marks in the laminate. And that’s why there’s usually a bowl on the island covering up the scars!

After that incident, we moved the menorahs into the dining room. And I’ve used aluminum foil to protect the dining room table’s surface from the wax that falls from those “dripless” (liars!) Chanukah candles. Until the other day!

A pristine MenorahMate is ready for action.

I was at Bed, Bath, and Beyond scoring the ATM bank that was on #2’s Chanukah list. As I walked to the registers, I saw some Chanukah goods next to that wonderful “50% Off” sign. Hanging off the side of the kiosk were MenorahMates. I had never seen them before! What a great idea!! Reading the product information, I chuckled out loud when I came to this part:

“Chanukah is all about tradition. And if lighting the menorah is the most recognizable tradition of the holiday, then placing aluminum foil under the menorah follows closely behind.” Hey, I resemble that statement!

What’s especially neat about the mats is that they have the candle-lighting blessings written on them. Plus they’re easy to dewax and store for years to come.

If only the MenorahMate had been there for us back in the day! Of course, I’ll be pointing at those holes and burn marks when I try to convince the Mister that we need to replace the old kitchen laminate with granite. Then I’ll probably be thankful for them!

At the Halfway Mark

The Chanukah candles come into focus.

In case you’re wondering how Chanukah is going in our family as we pass the halfway mark, here’s an update: 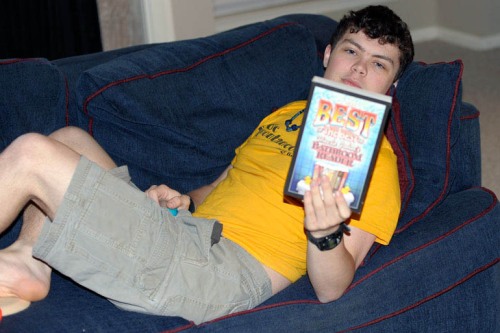 The #1 son checks out the book he received the first night.

The #1 son has gotten one book so far (“The Best of the Best of Uncle John’s Bathroom Reader”); the #2 son, much to his relief, is bookless. So far! 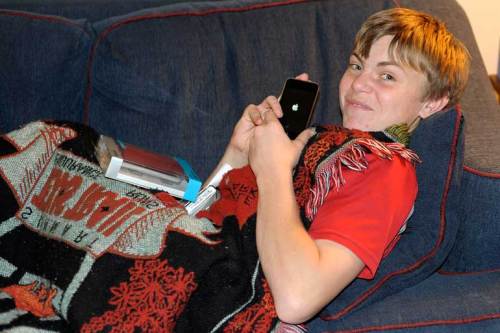 #2 was over the moon at receiving the iPod Touch and immediately downloaded the addictive Jelly Car app on it.

Sad to say (for him), #2 missed out on his present for night #3, because he was rude to me and showed not one speck of remorse. If I had had a big book for him in my gift stash, that’s what he would’ve gotten! I realize that his poor behavior was a direct reaction to the amount of studying he had to do for this week’s finals, but he knows that momma don’t like being yelled at.

#1 struggles with getting the shamash candle back in its holder.

Every year the #1 son has had trouble getting the shamash (helper) candle back in its holder, because he’s afraid the dripping wax will burn his fingers. He struggles with it for a minute or so until I come to the rescue and place the glowing candle safe and sound where it belongs. All while his younger brother laughs at him. This year has been no different.

Both boys light their candles.

The boys have been lighting their own menorahs since they were about seven or eight years old. This year I was entranced with how deep their voices were as they chanted the blessings over the candles. I’ve watched them grow from little boys to men every Chanukah!

As I’m taking photos of my patient (because of waiting presents) boys using the natural light from the candles, I can see such promise in their eyes. Sometimes it’s hard to focus when tears start to flow a bit! 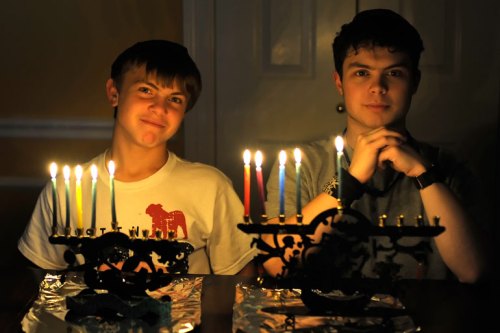 #1’s goal each year is not to smile, but I finally caught him last night (after 850 attempts)! #2 knows to just get it over with right away. He knows that I’ll keep snapping until I get what I want!

Notice something different in this photo? I turned the menorahs around, so that it looks like they were lit properly from the readers’ vantage point. Candles are placed in the holders from right to left (like reading Hebrew), but they’re lit left to right (newest night first). The boys do light the candles properly, but then the menorahs look improperly lit in the previous photos. Just thought I’d show a different view for all of you!

So now we have four nights left before we chip off the wax and store the menorahs for another year. Will I capture one more reluctant smile from #1? Will #2 get a book as an unwanted gift? And will I stop to think that next year only #2 will be lighting the menorah here while #1 uses an electric one in his college dorm room?

If I think about that last question, I’m going to have trouble keeping the boys in focus when I take photos the next four nights.