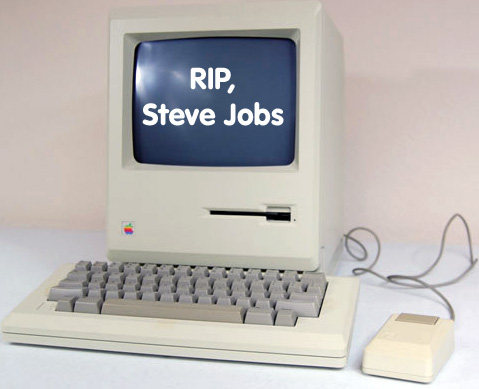 Fittingly, I got the news last night on my iPhone 4 via a text message from my older son, who was using his iPhone 4.

I rushed to my iMac to check it out and then continued to monitor my Twitter feed on my iPad as we watched “Survivor.” What my son had said was true, and everyone was tweeting about it.

Apple.com’s home page was simple (as shown on my iPad).

Steve Jobs’ untimely passing at the too-young age of 56 wasn’t surprising, of course. He was diagnosed with a rare form of pancreatic cancer in 2004 and survived a liver transplant five years later. He had been in failing health this year. When he resigned as Apple’s CEO this past August, it was obvious the end was near.

Still, I was overcome with sadness—the world has lost an amazing visionary who helped create technical products that enhanced our lives.  My life in particular was changed thanks to the Macintosh, which enabled me to properly use and show my creative talents. I’ve earned my living writing, editing, designing, and Photoshopping on the various Macs that I’ve owned since 1985. I’m probably one of the few people my age who has only owned Apple computers. And I expect it to stay that way.

Of course, I’ve loved my iPods (listened to my first one eight years ago), iPhone (the original, 3Gs, and my current 4), and iPad. If Apple makes it, I usually want it.

Jobs had a remarkable sense of the long term, of what consumers really wanted, though they didn’t know it at the time. He made products for everyone, not just the techies who thrived on the DOS challenge. Gosh, he put the darned internet in our pockets! He enabled my octogenarian mother to stay connected with her children, grandchildren, and great-grandchildren throughout the country . . . as well as with her friends . . . via her iMac.

He left a wonderful, inspiring legacy. That’s his greatest gift. 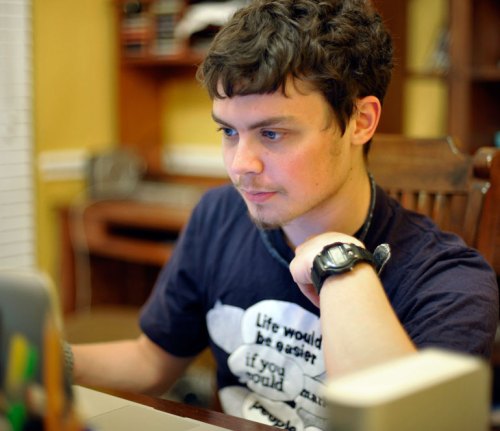 My #1 son loves his MacBook Pro.

I e-mailed my older son some words of wisdom spoken by Jobs:

“Your time is limited, so don’t waste it living someone else’s life. Don’t be trapped by dogma—which is living with the results of other people’s thinking. Don’t let the noise of others’ opinions drown out your own inner voice. And, most important, have the courage to follow your heart and intuition. They somehow already know what you truly want to become. Everything else is secondary.”

I hope my son takes that advice to heart; it will steer him in the right direction.

Rest in peace, Steve Jobs. Thank you for making the world a better place to live in.